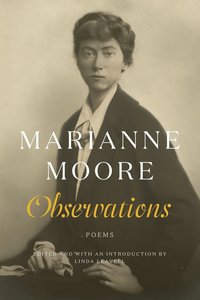 av Moore Marianne Moore
Häftad Engelska, 2016-04-05
149
Köp
Spara som favorit
Skickas inom 10-15 vardagar.
Gratis frakt inom Sverige över 159 kr för privatpersoner.
Finns även som
Visa alla 1 format & utgåvor
Marianne Moore's Observations stands with T. S. Eliot's The Waste Land, Ezra Pound's early Cantos, and Wallace Stevens's Harmonium as a landmark of modern poetry. But to the chagrin of many admirers, Moore eliminated a third of its contents from her subsequent poetry collections while radically revising some of the poems she retained. This groundbreaking book has been unavailable to the general reader since its original publication in the 1920s.

Presented with a new introduction by Linda Leavell, the author of the award-winning biography Holding On Upside Down: The Life and Work of Marianne Moore, this reissue of Observations at last allows readers to experience the untamed force of Moore's most dazzling innovations. Her fellow modernists were thrilled by her originality, her "clear, flawless" language--to them she was "a rafter holding up . . . our uncompleted building." Equally forceful for subsequent generations, Observations was an "eye-opener" to the young Elizabeth Bishop, its poems "miracles of language and construction." John Ashbery has called "An Octopus" the finest poem of "our greatest modern poet." Moore's heroic open-mindedness and prescient views on multiculturalism, biodiversity, and individual liberty make her work uniquely suited to our times.

Impeccably precise yet playfully elusive, emotionally complex but stripped of all sentiment, the poems in Observations show us one of America's greatest poets at the height of her powers.
Visa hela texten