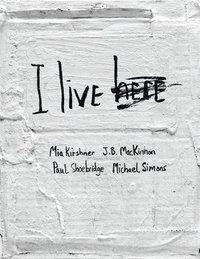 av Mia Kirshner, J B MacKinnon, Paul Shoebridges, Michael Simons
Inbunden Engelska, 2008-10-01
289
Köp
Spara som favorit
I Live Here is a visually stunning narrative - told through journals, stories, images, and graphic novellas - in which the lives of refugees and displaced people become at once personal and global. Bearing witness to stories that are too often overlooked, it is a raw and intimate journey to crises in four corners of the world: war in Chechnya, ethnic cleansing in Burma, globalization in Mexico, and AIDS in Malawi.

The voices we encounter are those of displaced women and children, in their own words or in stories told in text and images by noted writers and artists. The stories unfold in an avalanche: An orphan goes to jail for stealing leftovers. A teenage girl falls in love in a city of disappeared women. A child soldier escapes his army only to be saved by the people he was taught to kill.

From Publishers Weekly
This paper documentary, as they bill it, tells hot-button stories from four world crisis areas: Chechnya (in the midst of war), Burma (ethnic cleansing), Mexico (globalization) and Malawi (AIDS). Those credited are identified as an actor, an author and two creative directors who have conceptualized international advocacy campaigns, as well as a number of other artists and writers. Each 84-page book (collected in a foldout case) is formatted as a collage-illustrated multimedia journal with stories of various refugees. Two contain short graphic novels. Joe Sacco (Palestine) tackles Chechnya in his straightforward lack of style. Burma is the fumetti-inspired story of a young sex worker, featuring heavily photo-referenced art by Kamel Khelif. The Mexican entry tells the story of one of the many young female factory workers gone missing and found dead in Juarez. Malawi has the feel of an African folktale. An ambitious project of this scope, with all the attendant marketing, may strike the jaded as another guilt-assuaging, [...] charity effort. However, the vibrant, collage-like approach to the subject matter gives the material immediacy, even if those most likely to read it are already persuaded something should be done about these perils. (Oct.)
Copyright Â© Reed Business Information, a division of Reed Elsevier Inc. All rights reserved.

To learn more about the book, the project or the I Live Here Foundation go to www.i-live-here.com/
Visa hela texten

"Intense. . . . Disturbing. . . . Effective. . . . With I Live Here, Kirshner shines an unwavering, informative light on important and troubling non-U.S.-centric issues in a truthful and often disturbing manner. She elevates celebrity philanthropic efforts to an extraordinary new level of sophistication in content and style. . . . One of the finest looking publications ever produced. In toto, the package forms an amazing work of art. An exceptional book of rare quality, I Live Here exceeds all expectations." - The San Antonio Current

"Kirshner - with the help of Mackinnon, Shoebridge, and Simons - does an exceptional job putting a human face to devastating problems to which people of developed nations have become desensitized. I Live Here is both heartwrenching and beautiful, inspiring readers (without ever preaching) to reach out to those in need." - BookLoons.com

"I Live Here brings to life those who blend into the crowds we see on the news every day. . . . [It] makes a strong attempt to bring to life the world's oppressed in a way the news media cannot." - The Georgia Straight (Vancouver)

Mia Kirshner has worked as an actor in film and television; among her credits are Brian De Palma's The Black Dahlia and The L Word. I Live Here is her first book.

J.B. MacKinnon is the award-winning author of Dead Man in Paradise and Plenty.