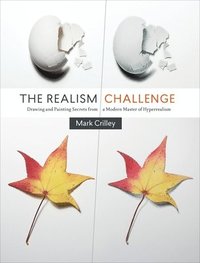 Drawing and Painting Secrets from a Modern Master of Hyperrealism

av Mark Crilley
Häftad Engelska, 2015-05-05
179
Köp
Spara som favorit
Finns även som
Visa alla 1 format & utgåvor
With over 10 million views and growing, Mark Crilley's "Realism Challenge" YouTube videos have an enormous worldwide legion of fans and have been featured on sites such as Yahoo News and Reddit. Now, for the first time, Crilley pulls back the curtain to reveal his artistic tricks and secret methods for creating these astonishing renderings. The Realism Challenge leads artists through Crilley's use of pencil, watercolour, pastel, and gouache to produce life-like, seemingly impossible drawings of common household objects like playing cards, crumpled paper, leaves, and seashells that look just like photographs. Each lesson builds off the previous, with sidebars covering specific techniques-such as rendering drop shadows, applying white highlights, and building from light to dark-that artists can master in order to conquer The Realism Challenge.
Visa hela texten

As seen on Boing Boing "The realistic work of Mark Crilley is perfectly in step with a zeitgeist that revels in intense, vivid, and urgent reality." --Comics Grinder "What I really love about this book...is it's simplicity...It offers you the ability to jump right in and get started." --Destroy the Cyborg

Mark Crilley is the author of Mastering Manga and Mastering Manga 2, as well as several manga novels. Since being selected for Entertainment Weekly's 'lt List' in 1998, Crilley has published nearly twenty books and developed a massive Internet following for his drawing demonstration videos, earning him a spot as one of the top 25 Most Subscribed to Gurus on YouTube. His books have been featured in USA Today, the New York Daily News, and Disney Adventures magazine, as well as on CNN Headline News.