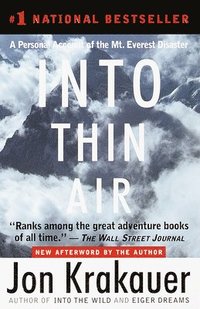 av Jon Krakauer
(2 röster)  |  Läs 1 recension
Häftad Engelska, 1999-01-01
172
Köp
Spara som favorit
A bank of clouds was assembling on the not-so-distant horizon, but journalist-mountaineer Jon Krakauer, standing on the summit of Mt. Everest, saw nothing that "suggested that a murderous storm was bearing down." He was wrong. The storm, which claimed five lives and left countless more--including Krakauer's--in guilt-ridden disarray, would also provide the impetus for Into Thin Air, Krakauer's epic account of the May 1996 disaster.
By writing Into Thin Air, Krakauer may have hoped to exorcise some of his own demons and lay to rest some of the painful questions that still surround the event. He takes great pains to provide a balanced picture of the people and events he witnessed and gives due credit to the tireless and dedicated Sherpas. He also avoids blasting easy targets such as Sandy Pittman, the wealthy socialite who brought an espresso maker along on the expedition. Krakauer's highly personal inquiry into the catastrophe provides a great deal of insight into what went wrong. But for Krakauer himself, further interviews and investigations only lead him to the conclusion that his perceived failures were directly responsible for a fellow climber's death. Clearly, Krakauer remains haunted by the disaster, and although he relates a number of incidents in which he acted selflessly and even heroically, he seems unable to view those instances objectively. In the end, despite his evenhanded and even generous assessment of others' actions, he reserves a full measure of vitriol for himself.
This updated trade paperback edition of Into Thin Air includes an extensive new postscript that sheds fascinating light on the acrimonious debate that flared between Krakauer and Everest guideAnatoli Boukreev in the wake of the tragedy. "I have no doubt that Boukreev's intentions were good on summit day," writes Krakauer in the postscript, dated August 1999. "What disturbs me, though, was Boukreev's refusal to acknowledge the possibility that he made even a single p
Visa hela texten