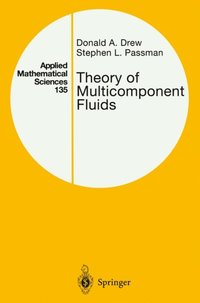 av Donald A Drew, Stephen L Passman
E-bok (PDF - DRM), Engelska, 2006-05-10
1509
Ladda ned
Spara som favorit
Laddas ned direkt
Läs i vår app för iPhone, iPad och Android
Finns även som
Visa alla 2 format & utgåvor
In this book, we give a rational treatment of multicomponent materials as intera- ingcontinua.Weoffertwoderivationsoftheequationsofmotionfortheinteracting continua; one which uses the concepts of continua for the components, and one which applies an averaging operation to the continuum equations for each c- ponent. Arguments are given for constitutive equations appropriate for dispersed multicomponent ?ow. The forms of the constitutive equations are derived from the principles of continuum mechanics applied to the components and their int- actions. The solutions of problems of hydromechanics of ordinary continua are used as motivation for the forms of certain constitutive equations in multicom- nent materials. The balance of the book is devoted to the study of problems of hydrodynamics of multicomponent ?ows. Many materials are homogeneous in the sense that each part of the material has the same response to a given set of stimuli as all of the other parts. An example of such a material is pure water. Formulation of equations describing the behavior of homogeneous materials is well understood, and is described in numerous standard textbooks. Many other materials, both manufactured and occurring in nature, are not - mogeneous. Such materials are often given names such as mixtures or composites.
Visa hela texten