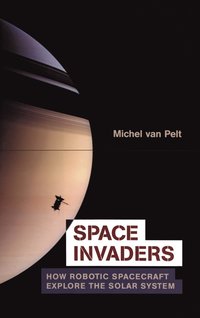 av Michel Van Pelt
Inbunden Engelska, 2006-12-01
359
Köp
Spara som favorit
Skickas inom 5-8 vardagar.
Fri frakt inom Sverige för privatpersoner.
Finns även som
Visa alla 2 format & utgåvor
Manned space programs attract the most media attention, and it is not hard to understand why: the danger, the heroism, the sheer adventure we as earthbound observers can imagine when humans are involved. But robotic missions deserve a respectful and detailed history and analysis of their own, and this book provides it. Instead of describing one specific spacecraft or mission, Michel van Pelt offers a "behind the scenes" look at the life of a space probe from its first conceptual design to the analysis of the scientific data returned by the spacecraft.
Visa hela texten

From the reviews: "Michel van Pelt in his book ... provides a practical look at these amazing machines that travel ever further from our home base on Earth. ... the reader can well appreciate the effort that goes into ensuring that robots can acquire the most useful information. van Pelt enhances this distillation by using a simple writing style with little specialized nomenclature. Thus, the book is well suited to youths, young adults and those with a general interest." (Universe Today, May, 2007) "This includes an historical introduction, an overview of the major successful and unsuccessful missions, and an attempt to anticipate some of the new technologies that may be introduced in the future. All of this is well written and easy to follow, though much of it was fairly familiar. ... this is a worthwhile read for anyone seeking a behind-the-scenes look at what goes on in those research centers and clean rooms where our robotic ambassadors are created and tested ... ." (Peter Bond, BBC SkyatNight, June, 2007) "In Space Invaders, Michel van Pelt, a cost and systems engineer with ESA, walks the reader through the steps needed to design, develop, and launch a planetary mission. ... The book is written for people who are not necessary familiar with space exploration, so there's some basic explanatory material in the book about orbits and rocket design. However, van Pelt provides plenty of more detailed information as well." (Jeff Foust, The Space Review, June, 2007) "Van Pelt discusses unmanned space missions, which he calls robotic missions carried out by robotic spacecraft. ... it will be useful to the general reader interested in learning about unmanned space exploration missions (US, European, and Russian) in all their complexity, in a chatty, somewhat amusing manner. It will also be useful to undergraduates who need an introduction to 'robotic' space exploration. Summing Up: Recommended. General readers; lower-and upper-division undergraduates; two-year technical program students." (A. M. Strauss, CHOICE, Vol. 44 (10), June, 2007)