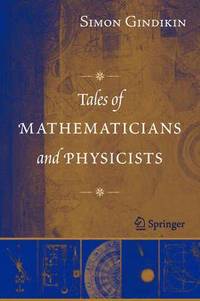 Tales of Mathematicians and Physicists

av Simon Gindikin
Häftad Engelska, 2006-11-01
999
Köp
Spara som favorit
Finns även som
Visa alla 1 format & utgåvor
This revised and greatly expanded second edition of the Russian text contains a wealth of new information about the lives and accomplishments of more than a dozen scientists throughout five centuries of history: from the first steps in algebra up to new achievements in geometry in connection with physics. The heroes of the book are renowned figures from early eras, as well some scientists of last century. A unique mixture of mathematics, physics, and history, this volume provides biographical glimpses of scientists and their contributions in the context of the social and political background of their times.
Visa hela texten

From the reviews: "This lively and entertaining book tells "tales'' of Cardano, Galileo, Huygens, Pascal, Gauss.... The reasoning of the scientists discussed is modernized so as to ease the reader's path; thus this book is not a scholarly discussion of the history of science readable only by experts, but a far more valuable work: a readable introduction to the scientific work discussed and the historical context (both scientific and social) in which it took place. Addressed to a "general audience," it deserves to have a wide one.... The author's own lucid style and accurate presentation translated into a smoothly flowing English make this book one which many, from college student to professional, will no doubt read with pleasure and learning."-Zentralblatt MATH "The author discusses principal events in the history of science that deserve the attention of devotees of physics and mathematics. The discussion covers a time span of four centuries beginning with the sixteenth century.... The book is a lively account of the lives and achievements of scientists like Cardano, Tartaglia, Galileo, Huygens, Pascal and Gauss.... This book will be enjoyable reading for anyone interested in the history of science."-Mathematical Reviews "[T]he work is engagingly written and will be enjoyed by those who love mathematics and physics. The rather mathematically sophisticated treatment of some sections will be heavy going for many American readers, but well worthwhile for those whose mastery of geometry and algebra is solid.... The book will be of particular interest to college students majoring in mathematics or physics and to high school students who are enthusiastic about mathematics.... Particularly suitable for the general collections of college libraries and for the libraries of superior high schools."-Choice "[This is a] readable, informal set of biographical vignettes.... Aimed at the general reader with some background in mathematics, the book's style is to discuss the circumstances that surrounded these great scientists and to give insight into their contributions to science. The discoveries themselves are explained clearly in modern notation, without detailed heuristic discussion, which is appropriate for the casual reader; those needing more historical specificity can look elsewhere. The evolution of research and the dissemination of discoveries are followed and permit interesting comparison.... In sum, this collection is recommended, particularly for its insights."-Edward Paul, Science Books & Films "Tales of Mathematicians and Physicists is a worthwhile book to read, especially for novices ... . But it's fun for everyone, and enlightening. ... it's especially pleasant to encounter old heroes again and, indeed, learn more about them - much more, in fact: this is serious scholarship and the mathematics is very good. And it would be an easy task to adapt Tales of Mathematicians and Physicists for use as a supplementary text in a course ... . It's a pleasure to recommend this book." (Michael Berg, MathDL, October, 2007) From the reviews of the second edition: "The text is based on various articles that appeared in the Soviet journal Quantum (Kvant). The presentation is mostly leisurely, and large parts of the book are accessible to talented high school students ... . It is a wonderful book that I recommend to everyone interested in mathematics." (Franz Lemmermeyer, Zentralblatt MATH, Vol. 1105 (7), 2007)

Ars Magna (The Great Art).- Two Tales of Galileo.- Christiaan Huygens and Pendulum Clocks.- Secrets of the Cycloid.- Blaise Pascal.- The Beginnings of Higher Geometry.- Leonhard Euler.- Joseph Louis Lagrange.- Pierre-Simon Laplace.- Prince of Mathematicians.- Felix Klein.- The Magic World of Henri Poincare.- The Enigma of Ramanujan.- On the Advantages of Coordinates and the Art of Chaining Hyperboloids.- The Complex World of Roger Penrose.