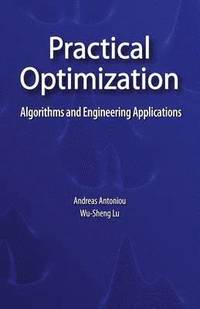 av Andreas Antoniou, Wu-Sheng Lu
Inbunden Engelska, 2007-03-01
1269
Köp
Spara som favorit
Skickas inom 10-15 vardagar.
Fri frakt inom Sverige för privatpersoner.
Finns även som
Visa alla 3 format & utgåvor
Practical Optimization: Algorithms and Engineering Applications is a hands-on treatment of the subject of optimization. A comprehensive set of problems and exercises makes the book suitable for use in one or two semesters of a first-year graduate course or an advanced undergraduate course. Each half of the book contains a full semester's worth of complementary yet stand-alone material. The practical orientation of the topics chosen and a wealth of useful examples also make the book suitable for practitioners in the field.
Visa hela texten

From the reviews: "Textbook on optimization that provides broad coverage of algorithmic techniques of optimization as well as applications of these techniques to problems in electrical engineering. ... The applications presented in the book motivate the development of the algorithms and provide material for exercises. This is a very good way to introduce this audience to optimization. ... This textbook is appropriate for its intended audience of graduate students in electrical engineering ... ." (Brian Borchers, SIGACT News, Vol. 40 (1), 2010)

Andreas Antoniou received the Ph.D. degree in Electrical Engineering from the University of London, UK, in 1966 and is a Fellow of the IET and IEEE. He served as the founding Chair of the Department of Electrical and Computer Engineering at the University of Victoria, B.C., Canada, and is now Professor Emeritus in the same department. He is the author of Digital Filters: Analysis, Design, and Applications (McGraw-Hill, 1993) and Digital Signal Processing: Signals, Systems, and Filters (McGraw-Hill, 2005). He served as Associate Editor/Editor of IEEE Transactions on Circuits and Systems from June 1983 to May 1987, as a Distinguished Lecturer of the IEEE Signal Processing Society in 2003, as General Chair of the 2004 International Symposium on Circuits and Systems, and is currently serving as a Distinguished Lecturer of the IEEE Circuits and Systems Society. He received the Ambrose Fleming Premium for 1964 from the IEEE (best paper award), the CAS Golden Jubilee Medal from the IEEE Circuits and Systems Society, the B.C. Science Council Chairman's Award for Career Achievement for 2000, theDoctorHonoris Causa degree from the Metsovio National Technical University of Athens, Greece, in 2002, and the IEEE Circuits and Systems Society 2005 Technical Achievement Award. Wu-Sheng Lu received the B.S. degree in Mathematics from Fudan University, Shanghai, China, in 1964, the M.E. degree in Automation from the East China Normal University, Shanghai, in 1981, the M.S. degree in Electrical Engineering and the Ph.D. degree in Control Science from the University of Minnesota, Minneapolis, in 1983 and 1984, respectively. He was a post-doctoral fellow at the University of Victoria, Victoria, BC, Canada, in 1985 and Visiting Assistant Professor with the University of Minnesota in 1986. Since 1987, he has been with the University of Victoria where he is Professor. His current teaching and research interests are in the general areas of digital signal processing and application of optimization methods. He is the co-author with A. Antoniou of Two-Dimensional Digital Filters (Marcel Dekker, 1992). He served as an Associate Editor of the Canadian Journal of Electrical and Computer Engineering in 1989, and Editor of the same journal from 1990 to 1992. He served as an Associate Editor for the IEEE Transactions on Circuits and Systems, Part II, from 1993 to 1995 and for Part I of the same journal from 1999 to 2001 and from 2004 to 2005. Presently he is serving as Associate Editor for the International Journal of Multidimensional Systems and Signal Processing. He is a Fellow of the Engineering Institute of Canada and the Institute of Electrical and Electronics Engineers.