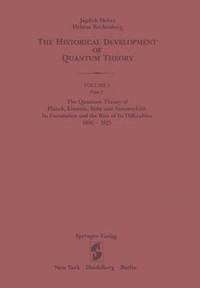 The Quantum Theory of Planck, Einstein, Bohr and Sommerfeld: Its Foundation and the Rise of Its Difficulties 1900-1925

av Jagdish Mehra, Helmut Rechenberg
Häftad Engelska, 2000-12-01
3339
Köp
Spara som favorit
Skickas inom 10-15 vardagar.
Fri frakt inom Sverige för privatpersoner.
Quantum Theory, together with the principles of special and general relativity, constitute a scientific revolution that has profoundly influenced the way in which we think about the universe and the fundamental forces that govern it. The Historical Development of Quantum Theory is a definitive historical study of that scientific work and the human struggles that accompanied it from the beginning. Drawing upon such materials as the resources of the Archives for the History of Quantum Physics, the Niels Bohr Archives, and the archives and scientific correspondence of the principal quantum physicists, as well as Jagdish Mehra's personal discussions over many years with most of the architects of quantum theory, the authors have written a rigorous scientific history of quantum theory in a deeply human context. This multivolume work presents a rich account of an intellectual triumph: a unique analysis of the creative scientific process. The Historical Development of Quantum Theory is science, history, and biography, all wrapped in the story of a great human enterprise. Its lessons will be an aid to those working in the sciences and humanities alike.
Visa hela texten

Comments by distinguished physicists on "The Historical Development of Quantum Theory":||"...the most definitive work undertaken by anyone on this vast and most important development in the history of physics. Jagdish Mehra, trained in theoretical physics under Pauli, Heisenberg, and Dirac, pursued the vision of his youth to write about the historical and conceptual development of quantum theory in the 20th century...This series of books on the HDQT has thus become the most authentic and permanent source of our knowledge of how quantum theory, its extensions and applications developed. My heartfelt congratulations."|-Hans A. Bethe, Nobel Laureate||"A thrilling and magnificent achievement!"|-Subrahmanyan Chandrasekhar, FRS, Nobel Laureate||"...capture(s) precisely, accurately, and thoroughly the very essence and all the fundamental details of the theory, and that is a remarkable achievement...I have greatly enjoyed reading these books and learned so many new things from them. This series of books will remain a permanent source of knowledge about the creation and development of quantum theory. Congratulations!"|-Paul A. Dirac, FRS, Nobel Laureate||"The wealth and accuracy of detail in 'The Historical Development of Quantum Theory' are breathtaking."|-Richard P. Feynman, Nobel Laureate

Bloggat om The Quantum Theory of Planck, Einstein, B...

I Quanta and Molecules: The Quantum Theory of Planck, Einstein and Nernst.- I.1 The Law of Blackbody Radiation.- I.2 The Significance of the Constants in Planck's Law.- I.3 Fluctuations and Light-Quanta.- I.4 Energy-Quanta and the Derivations from Classical Theories.- I.5 The Search for Other Quantum Phenomena.- I.6 Specific Heats, New Quantum Hypotheses and the First Solvay Conference.- I.7 The Consolidation of Quantum Theory.- II The Bohr-Sommerfeld Theory of Atomic Structure.- II.1 The Spectra of Atoms and Molecules: The Empirical Foundations.- II.2 Ideas Towards a Model of Atomic Structure.- II.3 Niels Bohr and the Origin of the Quantum Theory of Line Spectra.- II.4 Atoms as Conditionally Periodic Quantum Systems.- II.5 Three Principles of Atomic Theory.- III The Bohr Festival in Goettingen.- III.1 The Goettingen Tradition of Mathematics and Physics.- III.2 The Continuity of the Tradition: Richard Courant, Max Born and James Franck in Goettingen.- III.3 Progress in Atomic Models from 1913 to 1921.- III.4 Bohr's Wolfskehl Lectures and the Theory of the Periodic System of Elements.- III.5 Immediate Impact and Triumph of Bohr's Theory of the Periodic System of Elements.- IV The Mechanical and Spectroscopic Failures of Atomic Models.- IV.1 Wolfgang Pauli's Background and Early Scientific Work.- IV.2 The Helium Atom and Other Few-Body Problems.- IV.3 The Magnetic Anomaly and the Stern-Gerlach Effect.- IV.4 The Anomalous Zeeman Effect.- IV.5 The Breakdown of the Bohr-Sommerfeld Theory: Anomalous Zeeman Effects and the Crossed-Field Problem.- V The Problems of Radiation Theory.- V.1 The Proof of the Light-Quantum Hypothesis.- V.2 The Bohr-Kramers-Slater Theory of Radiation.- V.3 Bose's Light-Quantum Statistics and Its Extension to Gas Theory.- V.4 The Phase Waves Associated with Matter.- V.5 The Status of the Radiation Problem in 1925.- VI New Methods and Concepts in Atomic Theory.- VI.1 The Dispersion-Theoretic Approach.- VI.2 Atomic Structure and the Problem of Closed Electron Shells.- VI.3 The Rule for Equivalent Electrons: Pauli's Exclusion Principle.- VI.4 The Discovery of Electron Spin.- Epilogue.- References.- Author Index.