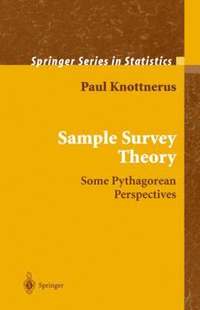 From the reviews: "Sample Survey Theory: Some Pythagorean Perspectives extends the concept of the sampling autocorrelation coefficient p and leverages its links to Pythagorean sum-of-squares relationships between estimators of survey variables in vector spaces. The goal is a compact, highly generalizable strategy for deriving useful estimates for the mean of a population. The approach will appeal to Technometrics readers who must estimate key quality parameters via statistically based sampling and testing of products and processes...The book would be a fine addition to the bookshelf of any Techometrics reader using sample survey techniques." Technometrics, May 2004 "Parts I and II of this book on sample survey theory present a novel approach to expressing the well-known Horvitz-Thompson estimator of a finite population total, its variance and corresponding variance estimators. Part III uses ideas from the econometrics literature to provide efficient estimators using information contained in linear or non-linear restrictions on the parameters." Short Book Reviews of the International Statistical Institute, April 2004 "This book has a special place among the numerous sample survey books for at least two reasons: sample survey theory is presented along the lines of classical statistics, and a general class of restriction estimators is developed...The book's approach is perfectly suited for teaching basic finite population inference in a general statistics course...Researchers and survey methodologists in statistical agencies could also benefit from this book." JASA, March 2005 "This volume is a result of two discussion papers of Statistics Netherlands, the first one entitled 'A Memoir on Sampling and Rho, the Generalized Intrasample Correlation Coefficient' (1999) and the other 'The General Restriction Estimator' (2000). ... Researchers will find the new treatment interesting and teachers who love to teach using geometrical interpretation would find it handy." (T. J. Rao, Sankhya, Vol. 66 (1), 2004) "The book, and in particular Part III of it, addresses many separate topics along with extensive notations ... . Let me conclude with the definite impression that the book gives a broad account on the theory of survey sampling, and ... that it includes some novel and interesting ideas worth to be studied in greater detail ... ." (Norbert Gaffke, Metrika, September, 2004) "This book deals primarily with the classical question of how to draw conclusions about the population mean of a variable ... . A large part of the book provides a novel and systematic treatment of sampling theory ... . The book can be used as a textbook for advanced undergraduate and beginning graduate students in statistics, mathematics, and economics. ... The book is very well written. The cross-references are excellent ... . it is to be strongly recommended ... ." (Jon Stene, Mathematical Reviews, 2004 g) "This book gives an introduction to sampling theory. ... As the subtitle announces, it is a special feature of this book that the author explains the statistical quantities in terms of the geometry of Euclidean spaces as Hilbert spaces. ... The book is well-written and recommendable both for graduated students and researchers." (Klaus Th. Hess, Zentralblatt MATH, Vol. 1015, 2003)