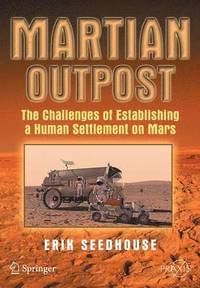 The Challenges of Establishing a Human Settlement on Mars

av Erik Seedhouse
Häftad Engelska, 2009-06-01
409
Köp
Spara som favorit
Skickas inom 5-8 vardagar.
Fri frakt inom Sverige för privatpersoner.
Finns även som
Visa alla 1 format & utgåvor
Mars Outpost provides a detailed insight into the various technologies, mission architectures, medical requirements, and training needed to send humans to Mars. It focuses on mission objectives and benefits, and the risks and complexities that are compounded when linked to an overall planet exploration program involving several expeditions and setting up a permanent presence on the surface. The first section provides the background to sending a human mission to Mars. Analogies are made with early polar exploration and the expeditions of Shackleton, Amundsen, and Mawson. The interplanetary plans of the European Space Agency, NASA, and Russia are examined, including the possibility of one or more nations joining forces to send humans to Mars. Current mission architectures, such as NASA's Constellation, ESA's Aurora, and Ross Tierney's DIRECT, are described and evaluated. The next section looks at how humans will get to the Red Planet, beginning with the preparation of the crew. The author examines the various analogues to understand the problems Mars-bound astronauts will face. Additional chapters describe the transportation hardware necessary to launch 4-6 astronauts on an interplanetary trajectory to Mars, including the cutting edge engineering and design of life support systems required to protect crews for more than a year from the lethal radiation encountered in deep space. NASA's current plan is to use standard chemical propulsion technology, but eventually Mars crews will take advantage of advanced propulsion concepts, such as the Variable Specific Impulse Magnetoplasma Rocket, ion drives and nuclear propulsion. The interplanetary options for reaching Mars, as well as the major propulsive maneuvers required and the trajectories and energy requirements for manned and unmanned payloads, are reviewed . Another chapter addresses the daunting medical problems and available countermeasures for humans embarking on a mission to Mars: the insidious effects of radiation on the human body and the deleterious consequences of bone and muscle deconditioning. Crew selection will be considered, bearing in mind the strong possibility that they may not be able to return to Earth. Still another chapter describes the guidance, navigation, and control system architecture, as well as the lander design requirements and crew tasks and responsibilities required to touch down on the Red Planet. Section 3 looks at the surface mission architectures. Seedhouse describes such problems as radiation, extreme temperatures, and construction challenges that will be encountered by colonists. He examines proposed concepts for transporting cargo and astronauts long distances across the Martian surface using magnetic levitation systems, permanent rail systems, and flying vehicles. In the penultimate chapter of the book, the author explains an adaptable and mobile exploration architecture that will enable long-term human exploration of Mars, perhaps making it the next space-based tourist location.
Visa hela texten

From the reviews: "Martian Outpost is THE book to read if you're interested in the future of manned space exploration. It is certainly in my top three best books about Mars missions. ... There's a lot of discovering to do in 'Martian Outpost' and if you plan to read only one book about Mars missions in your life, then I'd recommend this one." (Kadri Tinn, AstroMadness.com, November, 2013) "The main areas treated here concern planning, mission architecture and design, landing, propulsion systems and mission hardware with a concentration on the NASA Ares I-Ares V system concepts. ... useful to readers interested in space technology for its survey of planned spacecraft and missions for a trip to Mars and for its overview of some of the issues involved in setting up a Mars base. Summing Up: Recommended. General readers." (A. M. Strauss, Choice, Vol. 47 (5), January, 2010) "Predicting the future is always a gamble. ... With Erik Seedhouse's book, the planning and requirements for such a complex and difficult mission are laid out for all to see. ... The book also covers the options for landing and ascent on Mars, and has quite detailed planning breakdowns for the mission timeline. ... The book is a really easy read and should be an immediate purchase for anyone interested in how man will get to Mars." (Nick Howes, Astronomy Now, December, 2009)