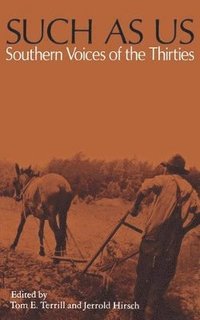 Southern Voices of the Thirties

av Jerrold Hirsch, Tom E Terrill
Häftad Engelska, 1979-04-01
239
Köp
Spara som favorit
Skickas inom 7-10 vardagar.
Gratis frakt inom Sverige över 159 kr för privatpersoner.
Finns även som
Visa alla 2 format & utgåvor
When These Are Our Lives was first published by The University of North Carolina Press in 1939, the late Charles A. Beard hailed it as "literature more powerful than anything I have read in fiction, not excluding Zola's most vehement passages." A very early experiment in the publication of oral history, it consisted of thirty-five life histories of sharecroppers, farmers, mill workers, townspeople, and the unemployed of the Southeast, selected from over a thousand such histories collected by the Federal Writers' Project in the 1930s. It was the Press' intention to publish several more volumes from the material that had been amassed, but World War II forced the cancellation of those plans. The editors of Such As Us have taken up the abandoned task and have produced a volume every bit as rich as its predecessor. From the perspective of forty years we can now read these stories as vivid chapters in the social history of the South, reaching as far back as slavery times and as far forward as the eve of World War II. To the modern reader the people speaking in this book may at first seem quaint, like curious from a past time and a different world. They worked on farms, in mills, oil fields, coal mines, and other people's homes. Their life histories provide a view of the world they saw, experienced, and helped to create. They tell about family life, religion, sex roles, being poor, and getting old, and they describe how major events -- the Civil War, Emancipation, World War I, the Great Depression, and the New Deal -- affected them. These accounts offer the reader the chance to experience vicariously the world these people lived in -- to know, for example, the wife of the tenant farmer who commented, "We seem to move around in circles like the mule that pulls the syrup mill. We are never still, but we never get anywhere." Such as Us is a contribution to the history of anonymous Americans. Like the former-slave narratives, which have become an important primary source for the historian, these life histories will enable the reader to reexamine traditional views and address new questions about the South. By providing an introduction and historical interchapters that place the histories in perspective, the editors set these histories within the cultural context of the 1930s and illustrate the relationship between private lives and public events. These life histories allow individuals to reach across time and share their lives with us. Although the people who speak in Such As Us are representatives of social types and classes, they are also unique individuals -- a paradoxical truth their life histories affirm.
Visa hela texten

These lives tell us about a region's fate and do so powerfully and dramatically.Robert Coles There's nothing as beautiful as the sound of the human voice. It is in these pages.Studs Terkel