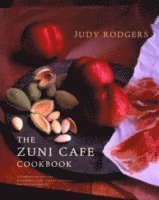 av Judy Rodgers, Gerald Asher
Inbunden Engelska, 2003-01-01
309
Köp
Spara som favorit
In The Zuni Cafe Cookbook, a book customers have been anticipating for years, chef and owner Judy Rodgers provides recipes for Zuni's most well-known dishes, ranging from the Zuni Roast Chicken to the Espresso Granita. But Zuni's appeal goes beyond recipes. Harold McGee concludes, "What makes The Zuni Cafe Cookbook a real treasure is the voice of Zuni's Judy Rodgers," whose book "repeatedly sheds a fresh and revealing light on ingredients and dishes, and even on the nature of cooking itself." Deborah Madison (Vegetarian Cooking for Everyone) says the introduction alone "should be required reading for every person who might cook something someday."
Visa hela texten

"Bursting with wisdom from every page...Even if it only contained her influential manifesto on salting meats, The Zuni Cafe Cookbook would still be name-checked by countless working cooks as the one book they'd save from a burning kitchen." -- Kevin Pang - AV Club "The Zuni Cafe Cookbook was the best reviewed in 2002. The critics love Rodgers's writing, some claiming that the introductory section alone should be required reading for anyone who ever wants to cook.... Rodgers has helped define California cuisine, and this cookbook captures it well." -- Bookmarks, five star review "This year's best cookbook-the one people are still likely to be talking about, and cooking from, 20 years down the line.... Just opening this book up is like plunking down the needle on one of those old LP's that tells you, on first listen, that you've made a friend you're going to keep for the rest of your life." -- New York Times "Authenticity, roots, craft; recipes deft as short stories. If you're buying only one, this is it." -- Newsweek, "Year's Ten Best in Food" "This marriage of seasoned European sensibility and California cafe culture is the best of both worlds, and it's the reason why you should rush out and buy this book." -- Christopher Kimball - Cook's Illustrated "Perhaps more valuable than anything else in Judy Rodgers' impressive The Zuni Cafe Cookbook is the wisdom of her detailed writings, present in recipes from a simple crostini to an elaborate multi-step braise. Rodgers' understated sensibilities, borne of many years of cooking, illuminate the book's creative composition and leave the reader with not just a great set of recipes, but with an education, too." -- Fine Cooking "Better than the cuisine, though, is the writing-and how many restaurant cookbooks can you say that about? Even the recipes are a joy to read." -- Russ Parsons - Los Angeles Times

Judy Rodgers (1956-2013) was chef and owner of the Zuni Cafe in San Francisco. Gerald Asher is a lifelong devotee to wine. Wine editor of Gourmet for 30 years, he has been honored for his writing and work in the international wine trade. He holds the Order of the Merite Agricole from the French government and is an inductee of California's Vintners' Hall of Fame.