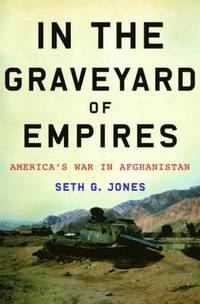 In the Graveyard of Empires

av Seth G Jones
Inbunden Engelska, 2009-07-06
409
Köp
Spara som favorit
Specialorder (osäker tillgång). Skickas inom 11-20 vardagar.
Fri frakt inom Sverige för privatpersoner.
Finns även som
Visa alla 2 format & utgåvor
After the swift defeat of the Taliban in 2001, American optimism has steadily evaporated in the face of mounting violence; a new "war of a thousand cuts" has now brought the country to its knees. In the Graveyard of Empires is a political history of Afghanistan in the "Age of Terror" from 2001 to 2009, exploring the fundamental tragedy of America's longest war since Vietnam. After a brief survey of the great empires in Afghanistan-the campaigns of Alexander the Great, the British in the era of Kipling, and the late Soviet Union-Seth G. Jones examines the central question of our own war: how did an insurgency develop? Following the September 11 attacks, the United States successfully overthrew the Taliban regime. It established security throughout the country-killing, capturing, or scattering most of al Qa'ida's senior operatives-and Afghanistan finally began to emerge from more than two decades of struggle and conflict. But Jones argues that as early as 2001 planning for the Iraq War siphoned off resources and talented personnel, undermining the gains that had been made. After eight years, he says, the United States has managed to push al Qa'ida's headquarters about one hundred miles across the border into Pakistan, the distance from New York to Philadelphia. While observing the tense and often adversarial relationship between NATO allies in the Coalition, Jones-who has distinguished himself at RAND and was recently named by Esquire as one of the "Best and Brightest" young policy experts-introduces us to key figures on both sides of the war. Harnessing important new research and integrating thousands of declassified government documents, Jones then analyzes the insurgency from a historical and structural point of view, showing how a rising drug trade, poor security forces, and pervasive corruption undermined the Karzai government, while Americans abandoned a successful strategy, failed to provide the necessary support, and allowed a growing sanctuary for insurgents in Pakistan to catalyze the Taliban resurgence. Examining what has worked thus far-and what has not-this serious and important book underscores the challenges we face in stabilizing the country and explains where we went wrong and what we must do if the United States is to avoid the disastrous fate that has befallen many of the great world powers to enter the region.
Visa hela texten

"I've just started reading Seth Jones's book on the war in Afghanistan, In the Graveyard of Empires, which someone told me is going to be the Fiasco of that war." -- Thomas E. Ricks, bestselling author of Fiasco: The American Military Adventure in Iraq, Foreign Policy "[D]estined to become the standard text on America's involvement in Afghanistan. It is a timely and important work, without peer in terms of both its scholarship and the author's intimate knowledge of the country, the insurgency threatening it, and the challenges in defeating it." -- Professor Bruce Hoffman, Georgetown University and author of Inside Terrorism "A deeply researched, clearly written, and well-analyzed account of the failures of American policies in Afghanistan, In the Graveyard of Empires lays out a plan to avoid a potential quagmire. This timely book will be mandatory reading for policymakers from Washington to Kabul but it will also help to inform Americans who want to understand what is likely to be the greatest foreign policy challenge of the Obama administration." -- Peter Bergen, author of Holy War, Inc. and The Osama bin Laden I Know "No one understands the successes and failures of American policy in Afghanistan better than Seth Jones....If you read just one book about the Taliban, terrorism, and the United States, this is the place to start." -- Jeremi Suri, Professor of history, University of Wisconsin "[Jones] zero[es] in on what went awry after America's successful routing of the Taliban in late 2001. His narrative is fleshed out with information from declassified government documents and interviews with military officers, diplomats and national security experts familiar with events on the ground in Afghanistan." -- Michiko Kakutani - The New York Times "History justifies Jones's worries...Jones may have written a blueprint for winning in a region that has historically brought mighty armies to their knees." -- Doug Childers - Richmond Times-Dispatch "Readers keeping up with the wars in the region will want this [book]." -- Library Journal "A useful and generally lively account of what can go wrong when outsiders venture onto the Afghan landscape. Those ventures have generally not turned out well...This is ominous, because [Jones] knows too much about recent interventions for his pessimism to be disregarded." -- Steven Simon - Foreign Affairs "Gauging whether the US and its allies can succeed in Afghanistan is only part of what Jones's excellent book is about." -- James Blitz - Financial Times "Seth Jones has the answer to the million-dollar question....until Seth Jones, nobody actually sought an empirical answer. Nobody crunched the numbers." -- John H. Richardson - Esquire "This is a serious work that should be factored in as a new policy as Afghanistan evolves." -- Jay Freeman - Booklist

Bloggat om In the Graveyard of Empires

Seth G. Jones is the Harold Brown Chair and Director of the Transnational Threats Project at the Center for Strategic and International Studies (CSIS), as well as the author of A Covert Action, In the Graveyard of Empires, and Hunting in the Shadows. He lives outside of Washington, DC.