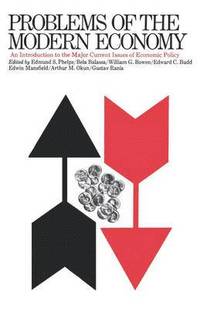 Problems of the Modern Economy

An Introduction to the Major Current Issues of Economic Policy

William G. Bowen (1933-2016) was an influential educator and the author of more than twenty books, including Lessons Learned: Reflections of a University President, The Shape of the River, and Equity and Excellence in American Higher Education. Edward C. Budd was a professor of economics at Pennsylvania State University. The late Edwin Mansfield was for many years a distinguished professor of economics at the University of Pennsylvania. He was an internationally recognized expert in the economics of technology and industrial organization. His numerous texts, all published by W.W. Norton, have sold millions of copies around the world. In 1979, when Sino-American scientific agreements were finally reached, Mansfield was the first American economist to lecture in the People's Republic of China. Arthur M. Okun was an economist and chairman of the Council of Economic Advisers between 1968 and 1969.