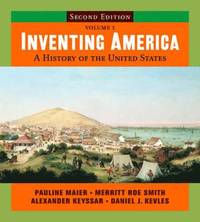 A History of the United States

Pauline Maier is William R. Kenan, Jr., Professor of History at MIT. Merrittt Roe Smith is Leverett and William Cutten Professor of the History of Technology at the Massachusetts Institute of Technology. His research focuses on the history of technological innovation and social change, and his publications include Harpers Ferry Armory and the New Technology and Military Enterprise and Technological Change. Professor Smith is a fellow of the American Academy of Arts and Sciences. Alexander Keyssar is Matthew W. Stirling Jr. Professor of History and Social Policy at Harvard University. He is a specialist in late-nineteenth- and twentieth-century social and political history. His first book, Out of Work: The First Century of Unemployment in Massachusetts, won the Frederick Jackson Turner Award of the Organization of American Historians. His most recent book is The Right to Vote: The Contested History of Democracy in the United States, a finalist for the Pulitzer Prize and winner of the Albert J. Beveridge Award of the American Historical Association. Daniel J. Kevles, the Stanley Woodward Professor of History at Yale University, taught American history for many years at the California Institute of Technology. He has written extensively on the history of science and its relationship to American politics and society in the twentieth century. His works include The Physicists: The History of a Scientific Community in Modern America and In the Name of Eugenics: Genetics and the Uses of Human Heredity. He is a member of the American Philosophical Society and the Society of American Historians and is currently a Distinguished Lecturer of the Organization of American Historians.