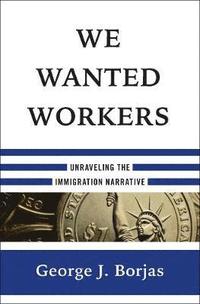 av George J Borjas
Inbunden Engelska, 2016-10-11
389
Köp
Spara som favorit
Specialorder (osäker tillgång). Skickas inom 11-20 vardagar.
Fri frakt inom Sverige för privatpersoner.
We are a nation of immigrants, and we have always been concerned about immigration. As early as 1645, the Massachusetts Bay Colony began to prohibit the entry of "paupers." Today, however, the notion that immigration is universally beneficial has become pervasive. To many modern economists, immigrants are a trove of much-needed workers who can fill predetermined slots along the proverbial assembly line. But this view of immigration's impact is overly simplified, explains George J. Borjas, a Cuban-American, Harvard labor economist. Immigrants are more than just workers-they're people who have lives outside of the factory gates and who may or may not fit the ideal of the country to which they've come to live and work. Like the rest of us, they're protected by social insurance programs, and the choices they make are affected by their social environments. In We Wanted Workers, Borjas pulls back the curtain of political bluster to show that, in the grand scheme, immigration has not affected the average American all that much. But it has created winners and losers. The losers tend to be nonmigrant workers who compete for the same jobs as immigrants. And somebody's lower wage is somebody else's higher profit, so those who employ immigrants benefit handsomely. In the end, immigration is mainly just another government redistribution program. "I am an immigrant," writes Borjas, "and yet I do not buy into the notion that immigration is universally beneficial. . . . But I still feel that it is a good thing to give some of the poor and huddled masses, people who face so many hardships, a chance to experience the incredible opportunities that our exceptional country has to offer." Whether you're a Democrat, a Republican, or an Independent, We Wanted Workers is essential reading for anyone interested in the issue of immigration in America today.
Visa hela texten

"Lucid and illuminating." -- Binyamin Appelbaum, correspondent for The New York Times "A captivating, insightful and easily accessible book that makes great reading for everyone interested in the subject." -- Christian Dustmann, University College London "Borjas, the world's leading economic expert on immigration, has penned a nontechnical, nearly conversational book pointing out all the issues in immigration's effects on an economy-particularly the American economy. The central message is 'it depends'-impacts are positive or negative for different natives, different kinds of immigrants, and at different times. With immigration again a central political issue, this book is must-reading for every voter." -- Daniel Hamermesh, Institute for the Study of Labor (IZA) and Royal Holloway University of London "An invaluable addition to the literature on U.S. immigration policy. A model of lucid exposition, it delves deeply into the subtle complexities of a subject that has been rife with sloppy and wishful thinking. Borjas reviews a mountain of evidence in support of a forceful argument for the position that, while there are benefits, one needs also to be mindful of the considerable costs associated with the liberalization of immigration policies." -- Glenn C. Loury, Merton P. Stolz Professor of the Social Sciences, Brown University "We Wanted Workers is essential to understanding America's future. Drawing on decades of research, Borjas cuts through the myths and obfuscations plaguing our immigration debate. This is the most lucid, powerful work of social science I've ever read." -- Reihan Salam, executive editor, National Review "One of America's leading immigration economists presents a level-headed exploration of the effects of immigration on migrant and nonmigrant workers." -- Publishers Weekly "An intriguing, clearly written polemic." -- Kirkus Reviews "A readable and detailed historical tour of America's immigration debates and policies...[Borjas] generously provides readers with arguments on all sides." -- Wall Street Journal "However much you think you know about immigration, you'll learn something from this book." -- Mark Krikorian - The National Review

George J. Borjas is the Robert W. Scrivner Professor of Economics and Social Policy at the Harvard Kennedy School. He is the recipient of the 2011 IZA Prize in Labor Economics.