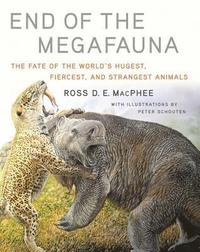 End of the Megafauna

The Fate of the World's Hugest, Fiercest, and Strangest Animals

av Ross D E MacPhee
Inbunden Engelska, 2018-11-13
289
Bevaka
Spara som favorit
Bokens leverantör håller tillfälligt stängt på grund av Coronapandemin. Klicka "Bevaka" för att få ett mejl när boken går att beställa igen.
Until a few thousand years ago, creatures-"megafauna"-that could have been from a sci-fi thriller roamed the earth. With a handful of exceptions, all are now gone. Ross MacPhee explores the question of what caused the disappearance of these prehistoric behemoths, examining the extinction theories, weighing the evidence and presenting his conclusions. He comments on how past extinctions can shed light on future losses and on the possibility of bringing back extinct species through genetic engineering. Gorgeous four-colour illustrations bring these megabeasts back to life in vivid detail.
Visa hela texten

"... highly readable book..." -- The British Association of Nature Conservationists Magazine "Delving far deeper into the subject matter than anything you would have likely experienced before, this is a fascinating examination of a long-forgotten past and proof that giant life didn't end with the dinosaurs. A great gift for those who like their history with bite." -- How It Works "In End of the Megafauna, palaeontologist Ross MacPhee explores the current hypotheses, weighing up the evidence with academic rigour and delivering it with pop-science clarity." -- BBC Wildlife "Palaeomammalogist Ross MacPhee examines the theories, such as human over-hunting, climate change, emergent infections and food-web disruption; articulates the ongoing debate around them and what that might tell us about today's biodiversity crisis; and takes a look at de-extinction. Packed with evocative artwork by Peter Schouten." -- Nature "Ross McPhee's End of the Megafauna is a marvellous survey of what we know about the magnificent creatures who shared our world just 12,000 years ago, and he is brilliantly served by the superb illustrations of Australian artist Peter Schouten. There are also excellent maps and diagrams, helping you remember the difference between your Pleistocene and Holocene. The book is also a compelling, sometimes demanding and scientifically rigorous detective story." -- The Sunday Times

Bloggat om End of the Megafauna

Ross D. E. MacPhee is a paleomammalogist with the American Museum of Natural History in New York City, where he has worked since 1988. He has conducted more than fifty expeditions in many parts of the world, including both polar regions. In addition to numerous scientific papers, he is the author of Race to the End: Amundsen, Scott, and the Attainment of the South Pole (2010) and the editor of Extinctions in Near Time: Causes, Contexts, and Consequences (1999). Peter Schouten is a self-taught and trained artist who works primarily in the field of natural history illustration. He has illustrated many award-winning books and his artworks have been collected by museums and galleries around the globe. In 2015 he was awarded the title Member of the Order of Australia, in recognition of his contributions to the development of Australian arts and sciences.