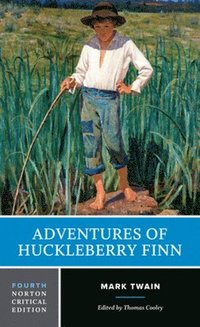 av Mark Twain, Thomas Cooley
Häftad Engelska, 2021-12-03
138
Köp
Spara som favorit
Finns även som
Visa alla 8 format & utgåvor
This Norton Critical Edition includes: The American first edition text, plus the reinstated "raft passage" from Life on the Mississippi (1883), complete with all original illustrations by Edward Windsor Kemble and, for the raft passage, John Harley. Editorial matter by Thomas Cooley. A rich selection of contextual and source documents centred on the novel's historical background, language, composition and reception, four of them new to the Fourth Edition. Seventeen carefully chosen critical assessments of Mark Twain's greatest work, ten of them new to the Fourth Edition. A chronology and a selected bibliography. About the Series Read by more than 12 million students over fifty-five years, Norton Critical Editions set the standard for apparatus that is right for undergraduate readers. The three-part format-annotated text, contexts and criticism-helps students to better understand, analyse and appreciate the literature, while opening a wide range of teaching possibilities for instructors. Whether in print or in digital format, Norton Critical Editions provide all the resources students need.
Visa hela texten

Samuel Langhorne Clemens (1835-1910), best known to the world by his pen-name Mark Twain, was an author and humorist, noted for his novels The Adventures of Huckleberry Finn (1884), which has been called "the Great American Novel", and The Adventures of Tom Sawyer (1876, among many others. Thomas Cooley is Emeritus Professor of English at The Ohio State University. He is the author of articles and books on American literature, including The Ivory Leg in the Ebony Cabinet: Madness, Race, and Gender in Victorian America and Educated Lives: The Rise of Modern Autobiography in America. He is also the editor of Back to the Lake, The Norton Sampler, and other textbooks in rhetoric and composition.