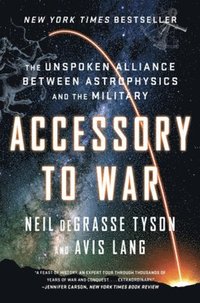 The Unspoken Alliance Between Astrophysics and the Military

av Neil Degrasse Tyson, Avis Lang
Häftad Engelska, 2019-10-05
209
Köp
Spara som favorit
Skickas inom 7-10 vardagar.
Gratis frakt inom Sverige över 159 kr för privatpersoner.
Finns även som
Visa alla 1 format & utgåvor
In this fascinating foray into the millennia-long relationship between science and military power, "the world's best science communicator" (Times Literary Supplement), astrophysicist Neil deGrasse Tyson and writer Avis Lang examine how the methods and tools of astrophysics have been enlisted in the service of war. "The overlap is strong, and it's a two- way street", say the authors, because the astrophysicists and military planners care about many of the same things: multi- spectral detection, ranging, tracking, imaging, high ground, nuclear fusion and access to space. Tyson and Lang call it a "curiously complicit" alliance. Spanning early celestial navigation to satellite-enabled warfare, Accessory to War is a richly researched and provocative examination of the intersection of science, technology, industry and power that will introduce Tyson's millions of fans to yet another dimension of how the universe has shaped our lives and our world.
Visa hela texten

"Accessory to War is thought-provoking and reflective..." -- Nature "... wide-ranging and very readable history of the overlap between science and the military, penned with editor Avis Lang... The book is a fascinating exploration of humanity' s capacity to combine discovery with destruction..." -- BBC Sky at Night "In Accessory to War, Neil deGrasse Tyson and Avis Lang give a sweeping panoramic overview of the enduring alliance between astrophysics and the military-from the Greeks to Galileo to GPS. The book's key contribution is in documenting the various ways science has aided military endeavors over the millennia and making the sometimes-arcane source material accessible." -- Science "Throughout history, wars tend to be won by nations that are at the forefront of science. Thus astronomers and physicists have, since ancient times, benefited from an uneasy alliance with the military. This enlightening book explores the history and current implications of this partnership between space science and national security." -- Walter Isaacson

Neil deGrasse Tyson is an astrophysicist with the American Museum of Natural History, host of the hit radio and Emmy-nominated TV show StarTalk, and the New York Times best-selling author of Astrophysics for People in a Hurry and Accessory to War: The Unspoken Alliance Between Astrophysics and the Military. He lives in New York City. Avis Lang is a research associate at the American Museum of Natural History's Hayden Planetarium. For half a decade, she edited Tyson's Natural History magazine column, Universe, parts of which became the basis for his Astrophysics for People in a Hurry, and later edited his anthology Space Chronicles. She lives in New York City.