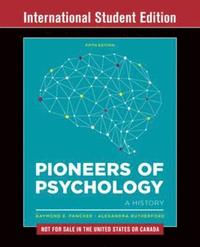 Not for Sale in the United States or Canada

Raymond E. Fancher is a Senior Scholar and Professor Emeritus at York University in Toronto. A founder of York's Ph.D. program in the History and Theory of Psychology, he has served as editor of the Journal of the History of the Behavioral Sciences and held top executive positions with the Society for the History of Psychology (Division 26 of the American Psychological Association) and Cheiron (The International Society for the History of Behavioral and Social Sciences). He is the author of Psychoanalytic Psychology: The Development of Freud's Thought and The Intelligence Men: Makers of the IQ Controversy (both published by Norton) as well as nearly 100 other publications on the history of psychology, and is a recipient of the Lifetime Achievement Award from the Society for the History of Psychology. Alexandra Rutherford is an associate professor of psychology in the History and Theory of Psychology Graduate Program at York University in Toronto. Her research interests include the history and contemporary status of feminist psychology and the relationships between psychology and American society from the mid-twentieth century to today. She is a fellow of four divisions of the American Psychological Association and is author of Beyond the Box: B. F. Skinner's Technology of Behavior from Laboratory to Life, 1950s-1970s (University of Toronto Press). She divides her time between Toronto and New York City.