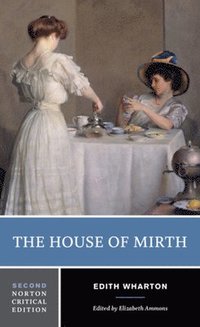 The House of Mirth

Bloggat om The House of Mirth

Pulitzer Prize-winning American writer and designer Edith Wharton (1862-1937) is the author of The House of Mirth, The Age of Innocence, Ethan Frome, The Decoration of Houses, and many other books. Elizabeth Ammons is the Harriet H. Fay Professor of Literature at Tufts University. She is the author of Conflicting Stories: American Women Writers at the Turn into the Twentieth Century, Edith Wharton's Argument with America, and Brave New Worlds: How Literature Will Save the Planet. She is the editor or co-editor of many books, including Tricksterism in Turn-of-the-Century American Literature: A Multi-Cultural Perspective, Uncle Tom's Cabin: A Casebook, American Color Writing, 1880-1920, Short Fiction by Black Women, 1900-1920, and the Norton Critical Edition of Edith Wharton's The House of Mirth.