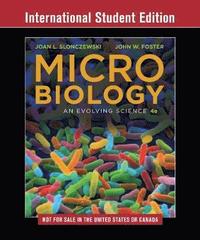 Joan L. Slonczewski received her BA from Bryn Mawr College and her PhD in molecular biophysics and biochemistry from Yale University, where she studied bacterial motility with Robert M. Macnab. After postdoctoral work at the University of Pennsylvania, she has since taught undergraduate microbiology in the Department of Biology at Kenyon College, where she earned a Silver Medal in the National Professor of the Year program of the Council for the Advancement and Support of Education. She has published numerous research articles with undergraduate coauthors on bacterial pH regulation and has published six science fiction novels, including A Door into Ocean and The Highest Frontier, both of which earned the John W. Campbell Memorial Award. She served as At-Large Member representing Divisions on the Council Policy Committee of the American Society for Microbiology and as a member of the editorial board of the journal Applied and Environmental Microbiology. John W. Foster received his BS from the Philadelphia College of Pharmacy and Science (now the University of the Sciences in Philadelphia) and his PhD from Hahnemann University (now Drexel University School of Medicine), also in Philadelphia, where he worked with Albert G. Moat. After postdoctoral work at Georgetown University, he joined the Marshall University School of Medicine in West Virginia. He is currently teaching in the Department of Microbiology and Immunology at the University of South Alabama College of Medicine in Mobile, Alabama. Dr. Foster has coauthored three editions of the textbook Microbial Physiology and has published more than 100 journal articles describing the physiology and genetics of microbial stress responses. He has served as Chair of the Microbial Physiology and Metabolism division of the American Society for Microbiology and as a member of the editorial advisory board of the journal Molecular Microbiology.