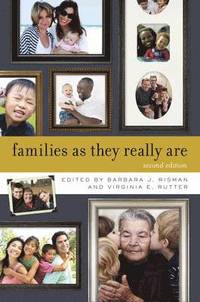 Families as They Really Are

av Barbara J Risman, Virginia Rutter
Häftad Engelska, 2015-03-06
609
Köp
Spara som favorit
Skickas inom 5-8 vardagar.
Fri frakt inom Sverige för privatpersoner.
Families As They Really Are, Second Edition, gets to the heart of the family values debate by re-framing the question about families from "Are they breaking down?" to "Where are they going, how, and why?" Written by an interdisciplinary community of experts who study and work with families, the essays in this book draw on the latest social science research and clinical expertise. These essays aren't reprints; every article is an original contribution to the research and theory about families-written specifically with undergraduate readers in mind.
Visa hela texten

"Families As They Really Are is a dream edited collection--solid sociology from leading scholars yet also readable and real." -- Mary Blair-Loy, University of California, San Diego "The story of America's families is too often narrowed to fit a predetermined theme. Instead, this collection presents powerful, well-written new work by a diverse roundtable of social scientists, whose wealth of research expertise is matched by a common commitment to clarity without over-simplification." -- Philip Cohen, University of North Carolina "This incredibly useful book goes well beyond rebutting myths about family change to provide succinct and highly readable introductions to practically every controversial family issue on the public agenda today. The attention to how class, race, gender and sexuality challenge families and shape family concerns is thoughtful and balanced." -- Myra Marx Ferree, University of Wisconsin "Families As They Really Are is an anthology as it really should be-an admirably comprehensive collection of provocative essays by the top scholars studying families today." -- Brian Powell, Indiana University "Here's a book destined to make publishers of textbooks on U.S. family studies tremble. Families As They Really Are is bursting its generous seams with lively, lucid, authoritative, original essays on every form and facet of contemporary family life. This fabulous collection presents work by a cavalcade of the field's most preeminent and creative scholars. No textbook can possibly compete." -- Judith Stacey, author, In the Name of the Family

Bloggat om Families as They Really Are

Barbara J. Risman is Professor and Head of the Department of Sociology at the University of Illinois at Chicago. She was previously Alumni Distinguished Research Professor, as well as the Founding Director of the Gender and Women's Studies Program at North Carolina State University. Risman is the author of Gender Vertigo: American Families in Transition and over two dozen journal articles. She is also the president of the board of The Council on Contemporary Families, a national organization whose mission is to bring new research findings and clinical expertise to public attention. In 2005, Risman was honored with the Katherine Jocher Belle Boone Award from the Southern Sociological Society for lifetime contributions to the study of gender. In 2013, she was elected vice president of the American Sociological Association. She is currently testing theories about whether hormonal exposure in utero influences gendered selves in adulthood. Risman strongly believes that sociologists have a responsibility both to do good research and to teach about it in the classroom and to the public at large. Virginia Rutter has been working in academia and media for two decades, first in Congress and at a mental health organization, then as a sociologist translating academic ideas to general audiences. She is the author of two books-The Gender of Sexuality and The Love Test, both with Pepper Schwartz-and numerous articles for Psychology Today. She has written on topics such as divorce, marriage, gender, sexuality, stepfamilies, adolescence, infidelity, depression, women in science, psychotherapy research, couples therapy, and domestic violence. Rutter gives talks and offers workshops on representations of gender in the media and on how, why, and when academics should work with the media. She has been mentioned in the Boston Globe, New York Times, Associated Press, USA Today, and CNN.com, and heard on NPR programs and various liberal and conservative radio programs. She was a co-investigator of the NIH-funded National Couples Survey and a public policy fellow at the National Academies of Science. Rutter is currently Professor of Sociology at Framingham State University, a board member of the Council on Contemporary Families, and a columnist at the Girl w/ Pen blog.