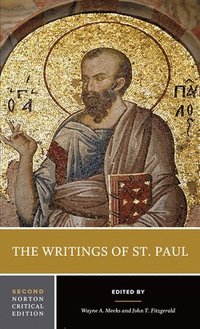 The Writings of St. Paul

av Paul Saint, Wayne A Meeks, John T Fitzgerald
Häftad Engelska, 2007-04-01
199
Köp
Spara som favorit
Skickas inom 5-8 vardagar.
Fri frakt inom Sverige för privatpersoner.
This thoroughly revised and expanded edition includes an entirely new introduction to Paul and the central issues surrounding his writings, as well as several newly included sections of writings from Paul's time to the present, among them "Annotated Text: Pseudo-Pauline Writings"; "The Apocryphal Paul: Some Early Christian Traditions and Legends," with writings by Jerome, Clement of Alexandria, Ambrosiaster, and others; "The Martyrdom of Paul"; "Paul and His Pagan Critics;" "Valentinus and the Gnostic Paul,"with writings by Theodotus and Elaine Pagels; "Paul and the Christian Martyrs"; "A Sampler of Patristic Interpretations"; "The Second Century Paul"; "Reading Romans," with writings from Origen, Theodoret of Cyrus, Paul W. Meyer, Stanley Stowers, Ernst Kasemann, and others; and "A Sampler of Modern Approaches to Paul and His Letters," with writings by Elisabeth Schussler Fiorenza, Abraham J. Malherbe, Peter Lampe, Margaret M. Mitchell, and Dale B. Martin. A helpful Epilogue-"The Christian Proteus," by Wayne A. Meeks-a Selected Bibliography, and an Index are also included.
Visa hela texten

Wayne A. Meeks is Woolsey Professor Emeritus of Biblical Studies at Yale University. He has been a consultant and interviewee for two PBS television series-"The Kingdom of David: The Saga of the Israelites" (2003) and "From Jesus to Christ" (1998). He has served as President of the Society of Biblical Literature and of the Studiorum Novi Testamenti Societas (the international society for New Testament studies). He is the author of Christ is the Question, The Origins of Christian Morality: The First Two Centuries, The Moral World of the First Christians, The First Urban Christians: The Social World of the Apostle Paul, The Prophet-King: Moses Traditions and Johannine Christology, and Go From Your Father's House: A College Student's Introduction to the Christian Faith. John T. Fitzgerald is Professor of Religious Studies at the University of Miami. His authored and edited books include Early Christianity and Classical Culture; Greco-Roman Perspectives on Friendship; Friendship, Flattery, and Frankness of Speech; Cracks in the Earthen Vessel: An Examination of the Catalogues of Hardships in the Corinthian Correspondence; The Tabula of Cebes; Philodemus and the New Testament World; Animosity, the Bible, and Us; and Passions and Moral Progress in Greco-Roman Thought.