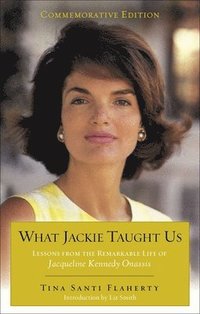 What Jackie Taught Us

Lessons from the Remarkable Life of Jaqueline Kennedy Onassis

What Jackie Taught Us offers insights about how Jackie lived with poise, grace, and zest, including wisdom about image and style, focus, courage and vision, men, marriage, and motherhood.

After more than a decade in print, this commemorative edition features fourteen new essays from notable individuals amplifying the ways in which Jackie's life has influenced them -- and society at large -- over the past fifty years, including contributions from syndicated columnists Liz Smith and Marguerite Kelly; authors Edna O'Brien, A.E. Hotchner and Malachy McCourt; president emeritus of the Municipal Art Society of New York, Kent Barwick; and former Metropolitan Museum of Art executive, Ashton Hawkins.

"The book is a must-read for anyone fascinated with the famed first lady, with essays, insights and observations from notables like Liz Smith, C.D. Green and Malachy McCourt." - Miami Herald

"Twenty years after her death, we're still curious about Jackie. From Flaherty's book, we get some clues as to why." - NewBooksinBiography.com

An award-winning author, philanthropist, and pioneer businesswoman, Tina Santi Flaherty is a board member of the Animal Medical Center and the Churchill Centre, among others. She is the author of The Savvy Woman's Success Bible (with Kay Gilman) and Talk Your Way to the Top. Visit her website at www.tinaflaherty.com. Follow her on Twitter @TinaSFlaherty.
Visa hela texten