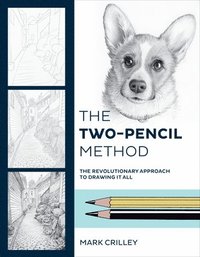 The Revolutionary Approach To Drawing It All

av Mark Crilley
Häftad Engelska, 2018-09-18
169
Köp
Spara som favorit
Finns även som
Visa alla 1 format & utgåvor
From the best-selling artist and YouTube art instructor, this book features step-by-step lessons that show you how to draw professional-quality portraits, landscapes, travel sketches, and animals using only two ordinary pencils. Great art doesn't have to be expensive. For the cost of a regular graphite writing pencil and an equally ordinary black colored pencil, you can create drawings worthy of framing and displaying. In this straightforward, aspiring artist's guide to rendering a variety of popular subjects with only two pencils, artist and art instructor Mark Crilley presents a direct, approachable, and achievable method for drawing just about anything. The Two-Pencil Method breaks down Crilley's techniques across six chapters of five lessons each. In each lesson, you'll learn how the two-pencil method can add depth and shading, allowing you to create bold and distinctive drawings that go beyond mere sketchbook doodles. The book moves from a primer on drawing basics to step-by-step examples of still lifes, landscapes, animals, travel sketches, and portraits. With each chapter, Crilley's confident and encouraging voice and expert insights demonstrate how to achieve stunning artistic results from the simplest of art materials.
Visa hela texten

"I've been drawing comics for years, and I learn something new every time I read one of Mark's books. The Two-Pencil Methodbreaks everything down in to simple and concise lessons that are straight to the point and full of wonderful knowledge." --Will Sliney, artist of Spider-Man 2099 and Scarlet Spider for Marvel Comics. Praise for The Drawing Lesson: "An original and accessible way to learn to draw." --Kirkus Review "An artful balance of character and technique, of observed human moments and carefully pitched instruction, that will appeal to students with artistic aspirations." --School Library Journal

Mark Crilley was raised in Detroit, Michigan. After graduating from Kalamazoo College, he traveled to Taiwan and Japan, where he taught English for nearly five years. It was during his stay in Japan that he created the Eisner Award-nominated comic Akiko on the Planet Smoo, which spawned a series of graphic novels and prose novel adaptations.In 1998, Mark Crilley was named to Entertainment Weekly's It List of the 100 most creative people in entertainment.