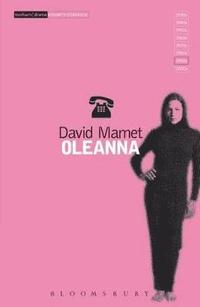 "An ear for reproducing everyday language has long been David Mamet's hallmark and he has now employed it to skewer the dogmatic, puritannical streak which has become commonplace on and off the campus. With Oleanna he continues an exploration of male-female conflicts begun with Sexual Perversity in Chicago in 1974. Oleanna cogently demonstrates that when free thought and dialogue are imperilled, nobody wins." The Independent, Michael Wise "John and Carol go to it with hand-to hand combat that amounts to a primal struggle for power. As usual with Mamet, the vehicle for that combat is crackling, highly distilled dialogue unencumbered by literary frills or phony theatrical ones." International Herald Tribune, Frank Rich

David Mamet is one of the most distinctive voices on the contemporary American stage. He was born and had his first and many subsequent plays premiere in Chicago. His screenplays include: The Postman Always Rings Twice, The Verdict, The Untouchables, We're No Angels and Glengarry Glen Ross; he was writer and director for House of Games, Things Change and Homicide.