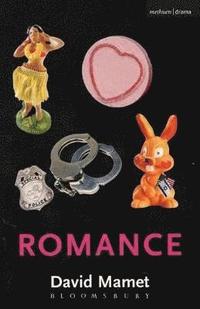 av David Mamet
Häftad Engelska, 2005-09-01
169
Köp
Spara som favorit
Skickas inom 10-15 vardagar.
Fri frakt inom Sverige för privatpersoner.
Finns även som
Visa alla 2 format & utgåvor
Exhilarating courtroom farce from America's finest playwright Romance is an uproarious courtroom farce which lampoons the American judicial system and exposes the hypocrisy surrounding personal prejudices and political correctness. Wildly humorous and often gob-smackingly outrageous, the play is set in a modern-day courtroom in New York during a week when there are Middle East peace talks being brokered in town. The court case at hand is unrelated, but the defendant and counsel come up with a plan to solve the conflict in the region. A pill-popping judge, a defendant and lawyer (on the same side) who hate each other, and a prosecutor with a troubled personal life are part of the picture. A new comedy from 'the finest American playwright of his generation' Sunday Times'A deliriously funny David Mamet farce' Associated Press'An exhilarating spectacle. Mamet is a connoisseur of fiasco, knows all about legal punctilio, and he has great fun bringing mayhem to the ritual' New YorkerPublished to tie-in with the play's European premiere at the Almeida Theatre, opening 6th September 2005
Visa hela texten

"* new comedy from 'the finest American playwright of his generation' Sunday Times * 'a deliriously funny David Mamet farce' Associated Press * 'an exhilarating spectacle. Mamet is a connoisseur of fiasco, knows all about legal punctilio, and he has great fun bringing mayhem to the ritual' New Yorker"

David Mamet was born in Chicago in 1947. His first and many subsequent plays were first performed by the St Nicholas Theatre company, Chicago, of which he was a founding member and Artistic Director. In 1978 he became Associate Artistic Director of the Goodman Theatre, Chicago, where American Buffal o had been first staged in 1975, subsequently winning an Obie Award and opening on Broadway in 1977 and at the National Theatre in 1978. His greatest hits, Glengarry Glen Ross and Oleanna followed in 1983 and 1993 respectively. Other works by Mamet published by Methuen include David Mamet Collected Plays 1-4; American Buffalo; Sexual Perversity in Chicago; Duck Variations; A Life in the Theatre; E dmond; The Cryptogram; Reunion, The Woods; The Water Engine; Lakeboat; The Disappearance of the Jews; Speed-the-Plow; Three Uses of the Knife, and Dr. Faustus.