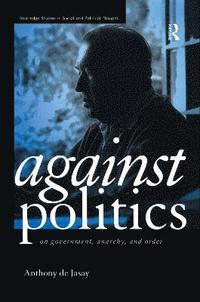 On Government, Anarchy and Order

av Anthony De Jasay
Inbunden Engelska, 1997-11-01
1729
Köp
Spara som favorit
Finns även som
Visa alla 3 format & utgåvor
Is the state a necessity, a convenience, or neither? It enforces collective choices in which some override the preferences and dispose of the resources of others. Moreover, collective choice serves as its own source of authority and preempts the space it wishes to occupy. The morality and efficacy of the result are perennial questions central to political philosophy. In Against Politics Jasay takes a closely reasoned stand, based on modern rational choice arguments, for rejecting much of mainstream thought about these matters. In the first part of the book, Excuses, he assesses the standard justification of government based consent, the power of constitutions to achieve limited government, and ideas for reforming politics. In the second part, Emergent Solutions , he explores the force of first principles to secure liberties and rights and some of the potential of spontaneous conventions for generating ordered anarchy. Written with clarity and simplicity, this powerful volume represents the central part of Jasay's recent work. Fully accessible to the general reader, it should stimulate the specialist reader to fresh thought.
Visa hela texten

'De Jasay - economist, one-time businessman, and political philosopher - has argued in a series of powerful books (notably The State and the just-published Against Politics that democracies are vulnerable to majoritarian tyranny in which the majority redistributes to itself through the state the possessions of the rest.' - Patrick Mitford, Daily Telegraph