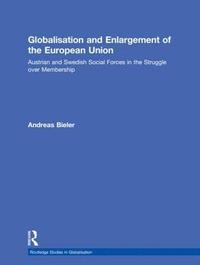 Globalisation and Enlargement of the European Union

Austrian and Swedish Social Forces in the Struggle over Membership

Bloggat om Globalisation and Enlargement of the Euro...

1. Introduction: theories of integration and Austria's and Sweden's accession to the European Union - a critique and alternative Some limitations of integration theories A neo-Gramscian alternative 2. Austria and Sweden in an era of global structural change The processes of globalisation The post-war economic and political systems in Austria and Sweden The impact of the processes of globalisation on Austria and Sweden Globalisation and the configuration of social forces in Austria and Sweden 3. Social forces and the struggle for application in Austria and Sweden The struggle over the Austrian application to the EU Sweden and social democratic hegemony: the struggle postponed 4. The conflict over the EU referenda in Austria and Sweden From the EEA via Maastricht and membership negotiations to the referenda The referendum struggle in Austria A debate at last: social forces mobilise in Sweden 5. Austria's and Sweden's accession to the EU and the changing security structure Neo-realism, neutral states and the end of the Cold War Austria: the silent redefinition of neutrality Sweden: neutrality redefined as non-alignment 6. The future enlargement of the EU towards Central and Eastern Europe A neo-Gramscian perspective on future EU enlargments Globalisation and the transformation of Poland, the Czech Republic and Hungary Poland, the Czech Republic, Hungary and the question of EU membership 7. Conclusions: globalisation, EU enlargement and the limits of neo-liberalism A neo-Gramscian perspective as an alternative approach to European integration Social Forces behind the Austrian and Swedish accession to the EU The possibilities for a counter neo-liberal project