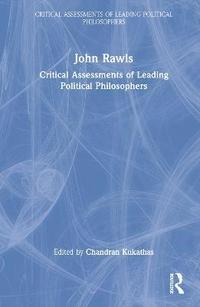 av Chandran Kukathas
Inbunden Engelska, 2002-10-01
13819
Köp
Spara som favorit
Skickas inom 10-15 vardagar.
Fri frakt inom Sverige för privatpersoner.
John Rawls (1921-2002) is, arguably, the most important political philosopher of our time. It is commonly observed that the publication in 1971 of his treatise A Theory of Justice initiated a return to political questions among Anglo-American philosophers and is largely responsible for the vigorous health of contemporary political philosophy. Rawls' ideas and approach have transformed philosophical inquiry in this area, and political theorists nowadays are obliged to make clear where they stand in relation to Rawls if they wish to be involved in mainstream discussions. Yet Rawls' influence has also extended beyond philosophy and has had a substantial impact on work in law, economics, and political science. Since the publication of A Theory of Justice, Rawls has written two other major works: Political Liberalism (1993) and The Law of Peoples (1999) and also issued a collection of his essays: Collected Papers (1999). This collection provides a thorough analysis of Rawls' work. In addition to a general introduction, the set includes introductions to each volume which help guide the reader through the material.
Visa hela texten

Volume One: Foundations and Method This volume focuses on the writings on Rawls' method. One of the most important dimensions to Rawls' contribution to contemporary political philosophy is his contribution to the question of how political philosophy should be done. Most importantly, Rawls has argued for a return to the method of the social contract, sparking not only vigorous debate about contractarianism but also generating a host of competing contractarian theories. Rawls was also important in introducing a range of other methodological notions into the lexicon, and these have in turn generated considerable debate. Volumes Two and Three: The Principles of Justice I and II Aside from his method, the most widely discussed parts of Rawls' theory are the Principles of Justice, which have been subject to detailed and exhaustive critical scrutiny. The principles have been examined not only for their plausibility and internal coherence, but also for their acceptability given their political pedigree as liberal principles of justice. Volume Four: Political Liberalism and The Law of Peoples This volume covers work on the second phase of Rawls' thought, brought into focus with the publication of Political Liberalism. This section includes articles on Rawls from the 1980s dealing with the new development in Rawls' thought. The final part of the volume on the Law of Peoples includes commentary on the most recent work in the Rawls corpus.