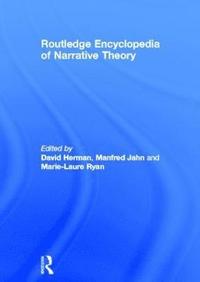 av David Herman, Manfred Jahn, Marie-Laure Ryan
Inbunden Engelska, 2004-12-01
2659
Köp
Spara som favorit
Skickas inom 10-15 vardagar.
Gratis frakt inom Sverige över 159 kr för privatpersoner.
Finns även som
Visa alla 4 format & utgåvor
The past several decades have seen an explosion of interest in narrative, with this multifaceted object of inquiry becoming a central concern in a wide range of disciplinary fields and research contexts. As accounts of what happened to particular people in particular circumstances and with specific consequences, stories have come to be viewed as a basic human strategy for coming to terms with time, process, and change. However, the very predominance of narrative as a focus of interest across multiple disciplines makes it imperative for scholars, teachers, and students to have access to a comprehensive reference resource.
Visa hela texten

'Potentially daunting, this complex subject is made a snap by clever arrangements for entries: five different types, from mini-essay to thumbnail definition, all cross-indexed. The helpful navigational aids include coded typeface, a thematically-organized reader's guide, and an excellent comprehensive index. Thorough, accessible, and remarkably free of obfuscating language. Highly recommended.'- Choice 'It is the single volume I would advise my students and other budding narratologists to purchase so as to have it constantly at hand for quick consultation...With its more than 700 tightly packed pages, close to 450 entries by 200 international experts on narrative-theoretical topics, plus an 80-page index, the Encyclopedia is well worth the investment.' - Pekka Tammi, Language and Literature 16:4 (2007)

David Herman teaches in the Department of English at Ohio State University. He has published several studies in the field, including The Cambridge Companion to Narrative, Narrative Theory and the Cognitive Sciences, Story Logic, and Narratologies. Manfred Jahn is based at the University of Cologne in Germany and has published articles on focalization, represented speech and thought, and cognitive narratology in venues such as the Journal of Pragmatics, Poetics Today, Style, and Narratologies. He has also authored a widely used online guide to narratology and narrative theory, freely available at . Marie-Laure Ryan is an independent scholar and a former recipient of NEH and Guggenheim Fellowships. She has published widely in the areas of narrative theory, electronic textuality, and media studies. Her most recent studies include Narrative across Media and Avatars of Story.