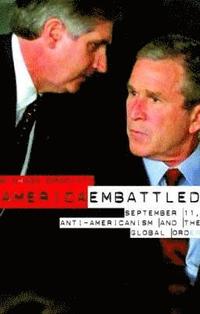 9/11, Anti-Americanism and the Global Order

av Richard Crockatt
Häftad Engelska, 2002-12-01
529
Köp
Spara som favorit
Finns även som
Visa alla 3 format & utgåvor
What causes Anti- Americanism and where are its historical roots? What is the impact of 9/11 on America's sense of itself and its role in the world? Is America paradoxically a victim of its own political and economic power? This book seeks to understand the terrible attacks of September 11th within a broader historical, political and ideological context. Rather than drawing on simple 'clash of civilisation' oppositions, the author argues that it is important to have an awareness of the complex historical processes which influence: America's sense of itself and its changing view of the world How the world, especially the Muslim world, views America The changing nature of international politics and the global system since the end of the cold war. Drawing on a wide range of contemporary and historical sources Richard Crockatt has written a balanced, subtle and highly readable book which provides genuine insight into American foreign policy, anti-Americanism and Islamic fundamentalism. It will be important reading for all those seeking to understand the background to the 'war on terror'.
Visa hela texten

"America Embattled is a thoughtful and highly readable treatment of the key issues raised by the September 11 terrorist attacks. It is sure to find a useful place in discussions of this topics in the classroom and beyond.." -Benjamin O. Fordham, University at Albany, SUNY

Preface Introduction September 11th 2001 1. How America Views the World: Historical Perspectives; America and the world: The Perceptual Gap; Patterns in the past; The question of Isolation; Expansion and Growth; An American Empire?; A Democratic Republic?; Government and the People or Government v the People? 2. How the World Views America: The Roots of Anti-Americanism; A Very British Story; The Meanings of Anti-Americanism; Americanism and Nationalism; Americanization and Anti-Americanism; (1) Europe (2) Latin America (3) India (4) The Muslim World Conclusion 3. Roots of Terror: Islam, Middle East and the United States; The Rise of Political Islam Arab-Israeli Conflict; The Middle East and the American Connection; The Crucible of Terrorism: War in Afghanistan, 1979-88, and its aftermath; Conclusion 4. The Limits of Governance: Globalization, Terrorism and the Transformation of International Politics since 1989; The Shock of the New; The End of the Cold War and its Consequesnces: Ideas of Order and Disorder; Globalization and its Limits; Elements of Instability; Governance and its Limits 5. George W. Bush: Responding to Terror; The Office and the Man; Bush in Relation to his Predecessors; September 11 and the War in Afghanistan; The Politics of the Coelition; Complications in the War Against Terrorism: (1) Conducts of the War (2) Moral and Legal issues (3) Paledtianain-Israeli Conflict (4) Extansion of War to Iraq; The War on Terrosim and the Nature of American Foreign Policy Conclusions