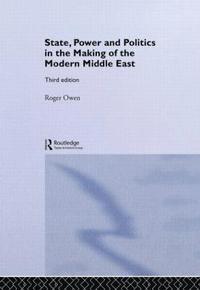 State, Power and Politics in the Making of the Modern Middle East

av Roger Owen
Inbunden Engelska, 2004-06-01
1729
Köp
Spara som favorit
Finns även som
Visa alla 4 format & utgåvor
Roger Owen has fully revised and updated his authoritative text to take into account the latest developments in the Middle East. This book continues to serve as an excellent introduction for newcomers to the modern history and politics of this fascinating region. This third edition continues to explore the emergence of individual Middle Eastern states since the fall of the Ottoman Empire at the end of the First World War and the key themes that have characterized the region since then.
Visa hela texten

'An excellent and exemplary introduction to the politics and society of the Middle East. The book's strengths lie in its comprehensive treatment of the region and the range of themes provided for the reader.' - Ray Bush, University of Leeds, UK