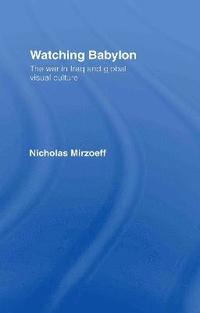 The War in Iraq and Global Visual Culture

av Nicholas Mirzoeff
Inbunden Engelska, 2004-11-01
1789
Köp
Spara som favorit
Finns även som
Visa alla 3 format & utgåvor
Groundbreaking and compelling, Watching Babylon examines the experience of watching the war against Iraq on television, on the internet, in the cinema and in print media. Mirzoeff shows how the endless stream of images flowing from the Gulf has necessitated a new form of visual thinking, one which recognises that the war has turned images themselves into weapons. Drawing connections between the history and legend of ancient Babylon, the metaphorical Babylon of Western modernity, and everyday life in the modern suburb of Babylon, New York, Mirzoeff explores ancient concerns which have found new resonance in the present day. In the tradition of Walter Benjamin, Watching Babylon illuminates the Western experience of the Iraqi war and makes us re-examine the very way we look at images of conflict.
Visa hela texten

"A tour de force by perhaps the most inventive--certainly the most wide-ranging-- practitioner of visual culture analysis in the world today. Focusing on the deadly vacuity of the Iraq Invasion, Mirzoeff describes the global media war with an unusually subtle attentiveness to its visual dimensions. More importantly, he situates his response inside a broader picturing of how globalizing capital and resurgent nation states are creating what he calls 'an empire of camps." - Terry Smith, University of Pittsburgh

Nicholas Mirzoeff is Associate Professor of Art at Stony Brook University. He is the author of Bodyscape; Art, Modernity and the Ideal Figure (1995) and An Introduction to Visual Culture (1999), and the editor of The Visual Culture Reader (second edition 2002)