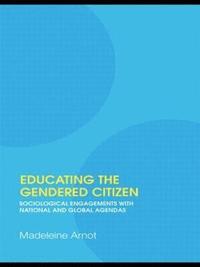 av Madeleine Arnot
(1 röst)
Häftad Engelska, 2008-09-24
559
Köp
Spara som favorit
Skickas inom 7-10 vardagar.
Fri frakt inom Sverige för privatpersoner.
Finns även som
Visa alla 3 format & utgåvor
Globalisation and global human rights are the two major forces in the twenty-first century which are likely to shape the sort of learner citizen created by the educational system. Schools will be expected to prepare young men and women for national as well as global citizenship. Male and female citizens will need to adapt to new social conditions, only some of which will encourage gender equality. This book offers a unique introduction to the contribution that sociological research on the education of the citizen can make to these national and global debates. It brings together for the first time a selection of influential new and previously published papers by Madeleine Arnot on the theme of gender, education and citizenship. It describes feminist challenges to liberal democracy, the gendered construction of the `good citizen' and citizenship education; it explores the implications of social change for the learner citizen and offers alternative gender-sensitive models of global citizenship education. Reaching right to the heart of current debates, the chapters focus on: feminist democratic values in education teachers' constructions of the gendered citizen European languages of citizenship the inclusion of women's rights into English citizenship textbooks gender struggles for equality in school pedagogy and curriculum the implications of personalised learning for the individualised learner citizen globalisation and the construction of a global ethic for citizenship education . It will be an invaluable text for all those interested in citizenship education, gender studies, sociology of education, educational policy studies, critical pedagogy and curriculum studies and international or comparative education.
Visa hela texten

'This book critically synthesises the best of the debates in feminist theory over several decades. Written with agility and depth, the sociological engagements with national and global political agendas provide a much needed gender perspective in reconnecting the role of education with citizenship. I do not know of any book that covers in such depth such a gamut of topics, both at the domestic and international level, establishing the importance of researching the gendered citizen. Madeleine Arnot has offered us a remarkable research agenda, and insightful research findings, that will guide the debate and thinking on the gendered citizen for years to come. This is the kind of book that is a real tour de force in educational theory.' - Professor Carlos Alberto Torres, University of California Los Angeles, USA 'It is clear from Arnot's work that gender sensitive and critical narratives of globalization and neoliberal educational reform have significant implications for citizenship education as it relates to engaging with both the redistributive and recognition elements of social justice, not only in terms of global poverty and the impact of transnational corporations/markets, but also in terms of addressing the politics of recognition vis-a-vis diversity and difference within and across nation states. This book is useful particularly in terms of its employment of theory in elaborating a political and gendered analysis of global citizenship education.' - Wayne Martino, University of Western Ontario, Educational Review Journal 2012 '