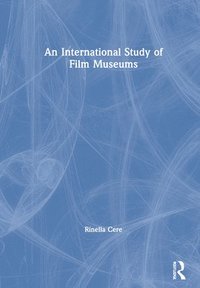 An International Study of Film Museums

av Rinella Cere
Inbunden Engelska, 2020-12-30
1379
Köp
Spara som favorit
Finns även som
Visa alla 3 format & utgåvor
An International Study of Film Museums examines how cinema has been transformed and strengthened through museological and archival activities since its origins and asks what paradoxes may be involved, if any, in putting cinema into a museum. Cere explores the ideas that were first proposed during the first half of the twentieth century around the need to establish national museums of cinema and how these have been adapted in the subsequent development of the five case studies presented here: four in Europe and one in the USA. The book traces the history of the five museums' foundation, exhibitions, collections, and festivals organised under their aegis and it asks how they resolve the tensions between cinema as an aesthetic artefact - now officially recognised as part of humanity's cultural heritage - and cinema as an entertainment and leisure activity. It also gives an account of recent developments around unifying collections, exhibition activities and archives in one national film centre that offers the general public a space totally devoted to film and cinematographic culture. An International Study of Film Museums provides a unique comparative study of museums of cinema in varying national contexts. The book will be of interest to academics and students around the world who are engaged in the study of museums, archives, heritage, film, history and visual culture.
Visa hela texten

"In An International Study of Film Museums, Rinella Cere provides a fascinating account of the various and sometimes conflicting impulses, interests and policies behind the development of film museums as sites for the presentation of cinema's history and heritage. While some museums have been primarily devoted to preserving the technologies for film production and exhibition, others like the Cinematheque Francaise have seen their principal role as being the acquisition, preservation and display of films of the past. Still others have sought to curate the social history of cinema and its audiences, while the critics of film museums - among them Francois Truffaut and Joseph Losey - have seen them as futile attempts "to preserve a transient art," no more than "a gimmick for tourists." The Love of Cinema explores the diverse conceptions of what a film museum might be and the motives and personalities of the dedicated individuals who created five of the world's leading film museums, largely without state support or public funding, in France, Britain, Italy, Catalonia and the US. In the breadth of its coverage and its illuminating detail, Cere's work demonstrates how our understanding of cinema's archaeology and evolution has been deepened by the archival and museological activities of the institutions she examines." - Richard Maltby, Flinders University, South Australia "An important work on the world of the film museum based on original research on institutions including the Cinematheque Francaise, Britain's National Science and Media Museum, and the George Eastman Museum in the United States, and key individuals such as Ernest Lindgren and Henri Langlois. Dr Cere deftly combines accounts of the historical development of her case studies with critical reflection on the different and contrasting notions of the film museum embodied in their practices. The cultural enterprise of establishing an institution incorporating a film archive, physical apparatuses such as cameras and projectors, and the numerous forms of documentation (studio records, memoirs) relevant to the cinema, is a complex process and Dr Cere's work reveals the ways in which it has been interpreted in different ways in different countries with different film heritages." - Tom Ryall, Sheffield Hallam University, UK

Rinella Cere is a Reader in Media and Cultural Studies at Sheffield Hallam University. She teaches the courses Globalisation and the Media and Postcolonial Media Culture and her publications include books, chapters and journal articles on media and popular culture in Britain, France and Italy. She is continuing to research museums of cinema around the world.

Introduction Chapter 1 The Birth of the Museum of Cinema Chapter 2 The National Science and Media Museum Chapter 3 Who is guarding the treasures now? The Cinematheque Francaise-Musee du Cinema Chapter 4 'Thought of a museum of cinema': the Museo Nazionale del Cinema in Turin Chapter 5 The Museu del cinema in Girona, Catalonia Chapter 6 Eastman House: an international museum of photography and cinema Conclusion