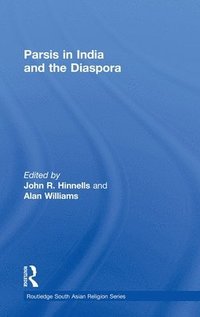 Parsis in India and the Diaspora

av John Hinnells, Alan Williams
Inbunden Engelska, 2007-10-01
1809
Köp
Spara som favorit
Skickas inom 10-15 vardagar.
Gratis frakt inom Sverige över 159 kr för privatpersoner.
Finns även som
Visa alla 4 format & utgåvor
The Parsis are India's smallest minority community, yet they have exercised a huge influence on the country. As pioneers in education in nineteenth century India, and as leading figures in banking and commerce, medicine, law and journalism, they were at the forefront of India's industrial revolution. Parsis were also at the heart of the creation of the Indian National Congress in the nineteenth century and contributed some of the great leaders through into the twentieth century. This book, written by notable experts in the field, explores various key aspects of the Parsis. It spans the time from their arrival in India to the twenty-first century. All contributions are based on original research and most of them use hitherto unexplored primary sources. The first part of the book analyzes the topic of Parsi migration from very different points of view; the second part presents leading Parsi personalities of the nineteenth and twentieth centuries. The final part is a set of studies of the Parsi traditional community in Bombay and an examination of three different diasporas. The concluding chapter, by John R. Hinnells, shows the range of contributions of Parsis to modern India and also in the diasporas, where the Zoroastrian religion is practiced in more countries around the globe than at any time in its history of more than 3,000 years.
Visa hela texten

'This collection presents a fascinating, multifaceted picture of a most remarkable religious minority whose culture, intellectual and economic influence has been enormous...This important book offers a wealth of information and deep, at times revealing, insights which the general reader will find illuminating and the professional scholar indispensable' - Almut Hintze, Bulletin of the School of Oriental and African Studies, 2009

John Hinnells was Professor of the Comparative Study of Religions at Manchester and SOAS. He is now retired but has a part time Research Professorship at Liverpool Hope University and is Honorary Professorial Research Fellow at SOAS. He has published widely in the area of South Asian religion, in particular the Parsis, and the comparative study of religions. His books include Zoroastrians in Britain (1996), Zoroastrian and Parsi Studies: selected works of John R. Hinnells (2000), and The Zoroastrian Diaspora (2005). Alan Williams is currently Senior Lecturer in Comparative Religion in the School of Arts Histories and Cultures, University of Manchester. He has published several books on Iranian studies and also writes about the history of religions, comparative literature and translation studies. His most recent book is a new English blank verse translation of the first book of Rumi's Persian mystical masterpiece, the Masnavi-ye Ma'navi (Spiritual Verses for Penguin Classics, 2006).