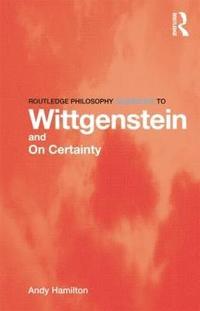 Routledge Philosophy GuideBook to Wittgenstein and On Certainty

av Andy Hamilton
Häftad Engelska, 2014-10-23
319
Köp
Spara som favorit
Skickas inom 7-10 vardagar.
Fri frakt inom Sverige för privatpersoner.
Finns även som
Visa alla 3 format & utgåvor
Ludwig Wittgenstein is arguably the most important philosopher of the twentieth century. In On Certainty he discusses central issues in epistemology, including the nature of knowledge and scepticism. The Routledge Philosophy Guidebook to Wittgenstein and On Certainty introduces and assesses: Wittgenstein's career and the background to his later philosophy the central ideas and text of On Certainty, including its responses to G.E. Moore and discussion of fundamental issues in the theory of knowledge Wittgenstein's continuing importance in contemporary philosophy. This GuideBook is essential reading for all students of Wittgenstein, and for those studying epistemology and philosophy of language. On Certainty, Wittgenstein's final work, addresses a category of "world-picture" propositions discovered by G.E. Moore. These challenge Wittgenstein's enduring commitment to a well-defined category of empirical propositions, and help to generate a critique of scepticism. Developing Wittgenstein's view that scepticism is self-undermining, the Guidebook offers a combative yet therapeutic interpretation that locates On Certainty between the standpoints of Kant and Hume.
Visa hela texten

'This unique and highly readable introduction sets Wittgenstein's late text in its historical context and emphasises enduring themes running through his later philosophy. Using recent work on On Certainty, Hamilton provides his reader with a clear exposition of the work's major themes, facilitating further engagement.' - Bernhard Weiss, University of Cape Town, South Africa 'Wittgenstein wrote, "Philosophy is not a body of doctrine but an activity... [of] clarification". He shows us paths from metaphysical abstraction to the more habitable, yet largely unrecognised, world of our everyday lives. But how does this therapeutic conception infuse the enigmatic epistemological writings known as On Certainty? As a guide, Hamilton is precisely the sort of reader Wittgenstein would have wanted, one fully engaged in thinking with, and against, the text. Hamilton's Wittgenstein is a humanist who rejects the current orthodoxy that models philosophy on the natural sciences. By demonstrating the power of the text to stimulate his own thoughts, Hamilton encourages us to think with the text ourselves.' - David Macarthur, Sydney University, Australia

Andy Hamilton teaches Philosophy at Durham University, UK. His books include Aesthetics and Music (2007), Lee Konitz (2007) and The Self in Question: Memory, the Body and Self-Consciousness (2013). He also teaches aesthetics and history of jazz at Durham, and contributes to The Wire magazine.