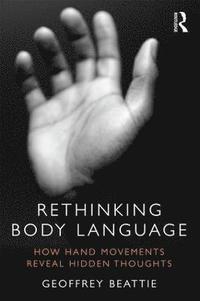 av Geoffrey Beattie
Häftad Engelska, 2016-05-27
479
Köp
Spara som favorit
Finns även som
Visa alla 3 format & utgåvor
Challenging all of our old assumptions about the subject, Rethinking Body Language builds on the most recent cutting-edge research to offer a new theoretical perspective on this subject that will transform the way we look at other people. In contrast to the traditional view that body language is primarily concerned with the expression of emotions and the negotiation of social relationships, author Geoff Beattie argues instead that gestures reflect aspects of our thinking but in a different way to verbal language. Critically, the spontaneous hand movements that people make when they talk often communicate a good deal more than they intend. This ground-breaking book takes body language analysis to a whole new level. Engagingly written by one of the leading experts in the field, it shows how we can detect deception in gesture-speech mismatches and how these unconscious movements can give us real insight into people's underlying implicit attitudes.
Visa hela texten

"The scientific study of body language and what it tells us about human nature is absolutely fascinating and especially relevant in an age of digital communication, where communication is being taken out of the body more and more and inserted into virtual spaces. Geoff Beattie's book is an in-depth and thorough investigation into the many modalities of communication, emotion, and cognition involved in body language. It is brilliant and a must read for anyone who is interested in the mind-body-culture nexus that makes humans unique." - Marcel Danesi, University of Toronto, Canada "This superbly written eye-opening book ends the myth that the body has its own language. Gestures and speech unify, and Beattie provides new understanding of exactly how. A rich array of examples show that gestures reveal a speaker's beliefs and presuppositions as they speak, even when unwittingly they contradict what is being said." - David McNeill, Professor Emeritus, University of Chicago "In Rethinking Body Language: How Hand Movements Reveal Hidden Thoughts, the popular British psychologist Geoffrey Beattie, building on previous publications (notably VisibleThought, 2004), presents his view of the relationships between hand gestures, language,and thought to a broad audience, luring readers with the promise, made in the subtitle, thatthe scrutiny of people's hand gestures will enable them to read other people's minds." -Dr. Jurgen Streeck, Professor, University of Texas at Austin

Geoffrey Beattie is Professor of Psychology at Edge Hill University. He is the author of 20 books and over 100 journal articles, and was awarded the Spearman Medal by the BPS in recognition of outstanding published work in psychology. He has presented a number of television programmes and was also the resident on-screen psychologist for 11 series of Big Brother, specialising in body language and social behaviour.

1. Introduction: A New Perspective on an Old Problem 2. Two Separate Languages? 3. Where the Action Is 4. 'A Remarkable Biological Miracle' 5. Images in the Hands, Images in the Mind 6. Different Vehicles of Meaning 7.Gestures and the Frustrations of Everyday Life. 8. Speech is Only Half the Story 9. Who or What the Hands Portray 10. How Our Eyes are Drawn to the Gestures of Others 11. 'The Gesture Limits Itself Intelligently to What Matters' 12. Manipulating the Salience of Individual Elements to See How Gestures Respond 13. How Metaphoric Gestures Affect Us 14. Putting Iconic Gestures into TV Advertisements 15. How Iconic Gestures Can Leak the Truth 16. Unconscious Gesture Can Leak Unconscious Attitude 17. Concluding Remarks 18. References