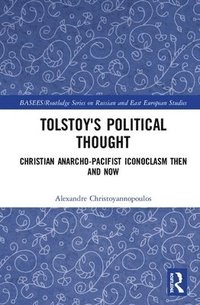 Christian Anarcho-Pacifist Iconoclasm Then and Now

av Alexandre Christoyannopoulos
Inbunden Engelska, 2019-09-18
1509
Köp
Spara som favorit
Skickas inom 7-10 vardagar.
Fri frakt inom Sverige för privatpersoner.
Finns även som
Visa alla 3 format & utgåvor
Leo Tolstoy (1828-1910), besides writing famous novels such as War and Peace, also wrote on political issues, especially later in his life, putting forward a political philosophy which might be termed 'Christian anarchism'. This book provides a comprehensive overview of Tolstoy's political thought. It outlines in a systematic way Tolstoy's thought, which was originally articulated unsystematically in diverse, often informal writing, such as pamphlets, letters, and speeches, as well as books, and in his novels, where Tolstoy's thinking is put forward implicitly through the novels' characters. The book sets out the basic themes of Tolstoy's political thought: his acceptance of the teachings of Jesus, his criticism of the way in which Jesus' teachings have been relayed by the church through traditional creeds and dogma, his passionate rejection of political violence by both the state and those working for reform, his plea for a nonviolent response to violence and injustice, and his call for society to forego its institutional shackles and enact a community of peace, love, and justice. The book also includes background information on the Russia of Tolstoy's time, including the religious context, and a discussion of how Tolstoy's political thought has been received by his admirers, who included Gandhi, and his critics.
Visa hela texten

"This book provides a much-needed comprehensive analysis of Tolstoy's writings on a range of interconnected and vitally important topics, such as his unequivocal opposition to violence at multiple levels, his challenge to the role of the state in imposing order and control on society, and constructive nonviolent possibilities for political activism. Tolstoy's contribution to the discussion of such seminal issues has been marginalised for far too long, and this thorough and provocative examination of Tolstoy's thought demonstrates not only its historical importance but its continuing intellectual and practical relevance." - Iain Atack, University of Dublin, Ireland. "Tolstoy's Political Thought is a really terrific and timely book. Clearly and eloquently written, it fills a real gap in Tolstoy studies by systematising the iconoclast's prolific, eclectic and often confronting works. In the process, Alexandre Chritoyannopoulos powerfully demonstrates that Tolstoy's thought on pacifism, anarchism, anticlericalism, asceticism and activism is as relevant today as when it was first published. This book will speak to a wide audience. Highly recommended." - Richard Jackson, University of Otago, New Zealand "In this thoughtful and engaging study, Alexandre Christoyannopoulos carefully unpicks key strands of Tolstoy's political thought - pacifism, anarchism, anti-clericalism, asceticism - locating them in their proper context, exploring both their influence and their contemporary relevance, and setting out the counter-arguments that can and have been put forward to challenge them. This important volume is based on deep engagement with Tolstoy's work, and with Christian anarchist thought more broadly. It will be essential reading for anyone interested in the development and application of Tolstoy's ideas." - Charlotte Alston, Northumbria University, UK "As time goes on, many of Tolstoy's uncompromising ideas about violence have proved to be remarkably prescient. Alexandre Christoyannopoulos has written a lucid study of his political thought which is particularly valuable in its systematic approach and its twenty-first century viewpoint." - Rosamund Bartlett, author of Tolstoy: a Russian Life.

Alexandre Christoyannopoulos is a senior lecturer in politics and international relations at the School of Social Sciences and Humanities of Loughborough University.