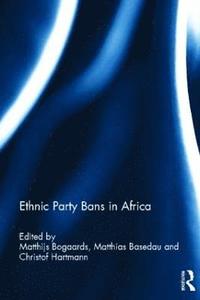 av Matthijs Bogaards, Matthias Basedau, Christof Hartmann
Inbunden Engelska, 2012-12-05
758
Köp
Spara som favorit
Kan levereras innan julafton!
Finns även som
Visa alla 3 format & utgåvor
In Sub-Saharan Africa, the spread of democracy since the 1990s has been accompanied by the proliferation of bans on ethnic political parties. A majority of constitutions in the region explicitly prohibit political parties to organize on the basis of race, ethnicity, religion, region and other socio-cultural attributes. More than a hundred political parties have been dissolved, suspended or denied registration on these grounds. This book documents the experience with ethnic party bans in Africa, traces its origins, examines its record, and answers the question whether ethnic party bans are an effective and legitimate instrument in the prevention of ethnic conflict. This book was published as a special issue of Democratization.
Visa hela texten

Matthijs Bogaards is professor of Political Science at Jacobs University, Bremen, Germany. In 2001 he was awarded the Frank Cass prize for the best article in volume 7 of Democratization (2000) and has a forthcoming article with the journal entitled 'Where to Draw the Line? From Degree to Dichotomy in Measures of Democracy'. His primary research interests include democratization, electoral systems and divided societies. Matthias Basedau is head of the research programme at the GIGA German Institute of Global and Area Studies and deputy of the director at the GIGA Institute of African Affairs, Hamburg, Germany. He has published numerous articles related to African politics, including 'Do Religious Factors impact armed conflict? Evidence from Sub-Saharan Africa', in Terrorism and Political Violence (2011), with Georg Struver, Johannes Vullers and Tim Wegenast. Christof Hartmann is professor of Political Science at University Duisburg-Essen, Germany. His key research areas include local and regional politics and democratization in Africa, and elections in Asia and the Pacific. He has also advised on behalf of various political foundations and electoral commissions and is registered as an expert of the United Nations Electoral Assistance Division.