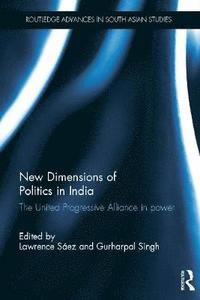 New Dimensions of Politics in India

The United Progressive Alliance in Power

av Lawrence Saez, Gurharpal Singh
Inbunden Engelska, 2011-09-22
1729
Köp
Spara som favorit
Skickas inom 10-15 vardagar.
Fri frakt inom Sverige för privatpersoner.
Finns även som
Visa alla 3 format & utgåvor
Following India's general election in May 2009, this book undertakes a critical evaluation of the performance of the United Progressive Alliance (UPA). It presents a thorough analysis of the UPA coalition government, and by providing an understanding of the new innovations in the UPA's policies, the book goes on to evaluate the effectiveness of these policies against their aims and objectives. This book suggests that there is an analytical framework for assessing the political consequences of the policies and the UPA's success, both at the national and state levels, with particular reference to new policies in governance, secularism and security. These three areas constitute important fault lines between the main national political parties in India, and provide an interesting point of departure to explore the new emerging trends, as well as the strong underlying continuities between the UPA administration and its predecessors. The book offers new insights into the structure of Indian politics, and is a useful contribution to studies in South Asian Politics, Governance and Political Parties.
Visa hela texten

"All in all, various chapters of this book offer useful insight to the challenges the Indian state has been confronting in nation building. While coalition politics and regimes have their own ways to deal with these issues, there are ideological differences that often play out in the determination of various policies. This is an important book for students of South Asian politics and public policy." - Shaikh Mujibur Rehman, 'Making sense of political success', The Hindu (December 10, 2012). "Roy-Chaudhury's work is noteworthy, considering the few studies recognizing in Hindu nationalist groups an internal threat to the country's stability." - Mario Gonzalez Castaneda, Journal of International and Global Studies Volume 4, Number 1, (November 2012).

Lawrence Saez is Associate Professor in Comparative and International Politics at the School of Oriental and Asian Studies (SOAS), UK. He is also Director of the Centre for South Asian Studies at SOAS and an Associate Fellow in the International Economics programme at Chatham House. Gurharpal Singh is the Nadir Dinshaw Chair in Inter-Religious Relations and the Deputy Director of the Religions and Development Research Programme (DFID). He is based in the School of Philosophy, Theology and Religion at the University of Birmingham, UK.