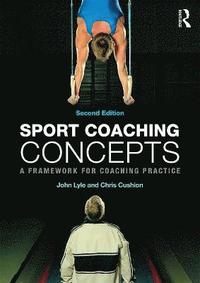 A framework for coaching practice

av John Lyle, Chris Cushion
Häftad Engelska, 2016-11-15
683
Köp
Spara som favorit
Fåtal ex i lager. Skickas inom 1-2 vardagar.
Gratis frakt inom Sverige över 159 kr för privatpersoner.
Finns även som
Visa alla 3 format & utgåvor
Coaching is a vital factor for success in sport at all levels. Sport Coaching Concepts offers a comprehensive introduction to the theoretical issues that underpin sport coaching practice. Now in a fully revised and updated new edition, it explains why a conceptual approach to sport coaching is more important than ever before, using practice-orientated analysis to help students develop a full understanding of coaching theory and technique. Drawing on more than a decade's worth of research, the book reflects upon the profound changes that have transformed coach education and development. It covers all the key topics of the sport coaching curriculum and includes six new chapters on the evolution of coaching theory, coaching expertise, decision making, social perspectives on the coach-athlete relationship, social inclusion and principles of coach development. Each chapter contains a full range of pedagogical features to aid learning, including discussion questions, practical projects, guides to further reading, case studies and insights from practising coaches. Sport Coaching Concepts is essential reading for all students of sport coaching and any serious coaches looking to develop their own coaching practice.
Visa hela texten

"Drawing on more than a decade's worth of research reflecting the profound changes that have transformed coach education and development. For me, it certainly captures the significant theoretical issues that underpin contemporary sport-coaching practice ... An essential read for students of sports coaching and any serious coaches looking to develop their own coaching practice", Laura Gale, Sports Coaching Review

John Lyle is Professor of Sport Coaching at Leeds Beckett University, UK, and previously Dean of the School of Psychology and Sport Sciences at Northumbria University, UK. He has had a long and successful career in higher education, first in physical education and later specialising in sport coaching studies. He established the first professional diploma in sport coaching and played a significant role in the development of sport coaching as an academic field of study. He is the author of Sports Coaching Concepts: First Edition, and co-editor of The Coaching Process and Sports Coaching: Professionalisation and Practice. Chris Cushion is Professor of Coaching and Pedagogy at Loughborough University, UK. His research interests focus on understanding coach learning, coaching practice and coach behaviour, within a framework of developing a sociology of coaching. He has worked on projects with a number of governing body organisations and professional clubs, as well as developing coaching and coach education in non-sporting contexts such as the police and the military. He is Associate Editor of the journal Sports Coaching Review and has co-edited two recent books: Sports Coaching: Professionalisation and Practice and The Sociology of Sports Coaching.