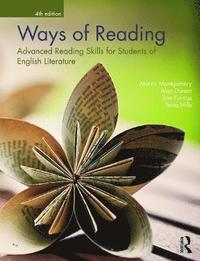 av Martin Montgomery, Alan Durant, Tom Furniss, Sara Mills
Häftad Engelska, 2012-10-31
459
Köp
Spara som favorit
Finns även som
Visa alla 2 format & utgåvor
Ways of Reading is a best-selling textbook for undergraduate students of English Language and English Literature, providing readers with the tools to analyse and interpret the meanings of literary and non-literary texts. Six sections, comprising twenty five self-contained units, cover: techniques of analysis and problem-solving language variation attributing meaning poetic uses of language narrative drama and performance texts The book combines the linguistic and literary background to each topic with discussion of examples from books, poems, magazines and online sources, and links those examples to follow-up practical activities and a list of titles for further reading. This fourth edition has been redesigned and updated throughout, with many fresh examples and exercises. Further reading suggestions have been brought up to date and new material on electronic sources and the Internet has been integrated. Ways of Reading continues to be the core resource for students of English Language and Literature.
Visa hela texten

'Ways of Reading is the one textbook that no undergraduate student of English can afford to do without. Whether for their essays in literary criticism or literary theory, this book is an invaluable resource providing expert guidance and relevant information. Each chapter offers clear explanations of theoretical concepts and practical applications of interpretive techniques. This richly revised fourth edition confirms its ever-rising popularity as a key textbook in English Studies, with exciting new material and fresh examples.' Jean-Jacques Weber, University of Luxembourg 'Ways of Reading is by far the most lucid and lively guide to the skills of reading. Beginners and advanced students alike will find clearly set out in this book the concepts and techniques, examples and exercises, that can help them become active and critical readers of all kinds of literary and media discourse.' Douglas Kerr, Hong Kong University 'This comprehensive introduction to the study of literature deftly balances a focus on practical techniques with a considered handling of theoretical approaches. Undergraduate students - and their lecturers - will welcome in particular its clarity, topical examples and accessibility.' Julie Scanlon, Northumbria University, UK

Martin Montgomery is Head of the Department of English at the University of Macau. He is the author of An Introduction to Language and Society (Routledge, 1995) and is a contributor to several books and journals. Alan Durant is Professor of Communication at Middlesex University, UK. His books include Meaning in the Media: Discourse, Controversy and Debate (2010), Language and Media (co-written with Marina Lambrou, Routledge, 2009), How to Write Essays and Dissertations: A Guide for English Literature Students (co-written with Nigel Fabb, 2006). Tom Furniss is Senior Lecturer in English Studies at the University of Strathclyde, UK. His books include Reading Poetry: An Introduction 2nd edition (co-written with Michael Bath, 2007). Sara Mills is Professor in the Department of English Studies at Sheffield Hallam University, UK. Her books include Language, Gender and Feminism (2011) Feminist Stylistics (1995), and Discourse (1997), all published by Routledge.