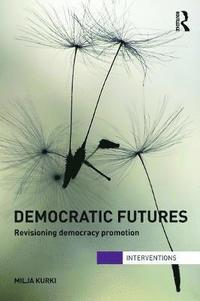 av Milja Kurki
Häftad Engelska, 2012-12-12
479
Köp
Spara som favorit
Finns även som
Visa alla 3 format & utgåvor
Democracy promotion has been an influential policy agenda in many Western states and international organisations, and amongst many NGO actors. But what kinds of models of democracy do democracy promoters promote? This book examines in detail the conceptual orders that underpin democracy support activity, and the conceptions of democracy that democracy promoters, consciously or inadvertently, work with. Such an examination is not only timely but much-needed in today's context of multiple democratic and financial crises. Contestation over democracy's meaning is returning, but how is this contestation reflected, if at all, in democracy promotion policies and practices? Seeking to open up debate on multiple models of democracy, this text provides the reader not only with the outlines of various possible politico-economic models of democracy, but also with a close empirical engagement with democracy promoters' discourses and practices. Drawing on a broad spectrum of examples, it exposes the challenges faced by Western governments in trying to reshape the political and economic landscape across the world and tentatively advances a set of concrete policy provocations which may enable a more pluralist and flexible democracy promotion practice to emerge. This innovative new work will be essential reading for all students of democratisation, democracy promotion and international relations.
Visa hela texten

'This book provides a useful contribution to debates about democracy promotion by looking at what Kurki deems the 'hidden' assumptions about political change that inform discussions of the topic.' - G. John Ikenberry

Milja Kurki is a lecturer at Aberystwyth University and the Principal Investigator of a European Research Council-funded project, Political Economies of Democratisation (2008-2012).