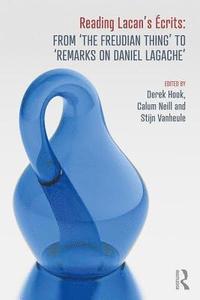 Reading Lacan's Ecrits: From 'The Freudian Thing' to 'Remarks on Daniel Lagache'

Between Freud and structuralism

av Derek Hook, Calum Neill, Stijn Vanheule
Häftad Engelska, 2019-08-01
449
Köp
Spara som favorit
Skickas inom 5-8 vardagar.
Gratis frakt inom Sverige över 159 kr för privatpersoner.
Finns även som
Visa alla 1 format & utgåvor
The Ecrits was Jacques Lacan's single most important text, a landmark in psychoanalysis which epitomized his aim of returning to Freud via structural linguistics, philosophy and literature. Reading Lacan's Ecrits is the first extensive set of commentaries on the complete edition of Lacan's Ecrits to be published in English. An invaluable document in the history of psychoanalysis, and one of the most challenging intellectual works of the 20th Century, Lacan's Ecrits still today begs the interpretative engagement of clinicians, scholars, philosophers and cultural theorists. The three volumes of Reading Lacan's Ecrits offer just this: a series of systematic paragraph-by-paragraph commentaries - by some of the world's most renowned Lacanian analysts and scholars - on the complete edition of the Ecrits, inclusive of lesser known articles such as 'Kant with Sade', 'The Youth of Gide', 'Science and Truth', 'Presentation on Transference' and 'Beyond the "Reality Principle"'. The originality and importance of Lacan's Ecrits to psychoanalysis and intellectual history is matched only by the text's notorious inaccessibility. Reading Lacan's Ecrits is an indispensable companion piece and reference-text for clinicians and scholars exploring Lacan's magnum opus. Not only does it contextualize, explain and interrogate Lacan's arguments, it provides multiple interpretative routes through this most labyrinthine of texts. Reading Lacan's Ecrits provides an incisive and accessible companion for psychoanalysts and psychoanalytic psychotherapists in training and in practice, as well as philosophers, cultural theorists and literary, social science and humanities researchers who wish to draw upon Lacan's pivotal work.
Visa hela texten

"It all began with an improbable wager: ask 35 scholars to each write something intelligible about every single paragraph in one of the texts included in Jacques Lacan's magnum opus, Ecrits, so as to generate a commentary on the entire 800-page volume. And yet, after years of preparation, the wager has paid off: we have here useful and at times brilliant examples of textual explication! Cryptic formulations are lucidly unpacked, and mysterious references are provided, giving the serious reader myriad keys to fascinating texts"-Bruce Fink, translator of Ecrits: The First Complete Edition in English "Let's face it: Lacan's Ecrits, one of the classical texts of modern thought are unreadable - they remain impenetrable if we just pick the thick volume up and start to read it. Neill, Vanheule and Hook provide what we were all waiting for: a detailed commentary which does not aim to replace reading ECRITS but to render it possible. The three volumes do wonder, their effect is no less than magic: when, after getting stuck at a particularly dense page of Ecrits, we turn to the corresponding pages in the commentary and then return to the page of Ecrits which pushed us to madness, the same lines appear in all the clarity of their line of thought. It is thus a safe prediction that Neill, Vanheule and Hook's commentary will become a kind of permanent companion of the English translation of Ecrits, indispensable for everyone who wants to find her or his way in its complex texture."-Slavoj Zizek "Lacan's teaching is notoriously hard to access and comprehend. But this is done on purpose: to understanding the psyche, the subject and its interaction with socio-political reality cannot be a piecemeal operation. One needs to take into account the paradoxical and often counterintuitive effects of unconscious mechanisms, and of the extimate operation of the real within and beyond the symbolic and the imaginary. Coupling exegesis with multi-level interpretations, the numerous texts in this volume advance a commentary, both informative and suggestive, that will immensely help readers navigate the archipelago of the Lacanian Ecrits, without reducing in the least their complexity and inspirational value, without sacrificing their ability to surprise, provoke and jolt us out of our complacency."-Yannis Stavrakakis, Aristotle University of Thessaloniki "These essays will be an invaluable resource not only for those approaching the Ecrits for the first time but also for seasoned readers. Broad in scope yet following the detail of the text, they help guide us through Lacan's difficult prose, elucidating, contextualising and clarifying, and reminding us time and time again of the precision, power and originality of his rethinking of psychoanalysis".-Darian Leader

List of Jacques Lacan's Seminars; Introduction to 'Reading the Ecrits': La trahison de l'ecriture Derek Hook, Calum Neill & Stijn Vanheule 1 The Freudian Thing, or the Meaning of the Return to Freud in Psychoanalysis Adrian Johnston 2 Psychoanalysis and Its Teaching Michael Miller 3 The Situation of Psychoanalysis and the Training of Psychoanalysts in 1956 Patricia Gherovici & Manya Steinkoler 4 The Instance of the Letter in the Unconscious, or Reason Since Freud Calum Matheson 5 On a Question Prior to Any Possible Treatment of Psychosis Stijn Vanheule 6 The Direction of the Treatment and the Principles of Its Power Reitske Meganck & Ruth Inslegers 7 Remarks on Daniel Lagache's Presentation: "Psychoanalysis and Personality Structure" Ed Pluth