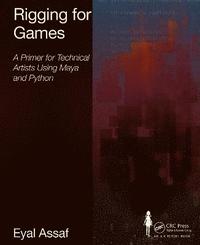 A Primer for Technical Artists Using Maya and Python

av Eyal Assaf
Häftad Engelska, 2015-12-01
499
Köp
Spara som favorit
Specialorder (osäker tillgång). Skickas inom 11-20 vardagar.
Fri frakt inom Sverige för privatpersoner.
Finns även som
Visa alla 3 format & utgåvor
Rigging for Games: A Primer for Technical Artists Using Maya and Python is not just another step-by-step manual of loosely related tutorials. Using characters from the video game Tin, it takes you through the real-world creative and technical process of rigging characters for video games and cinematics, allowing readers a complete inside look at a single project. You'll explore new ways to write scripts and create modular rigs using Maya and Python, and automate and speed up the rigging process in your creative pipeline. Finally, you'll learn the most efficient ways of exporting your rigs into the popular game engine Unity. This is the practical, start-to-finish rigging primer you've been waiting for! Enhance your skillset by learning how to efficiently rig characters using techniques applicable to both games and cinematics Keep up with all the action with behind-the-scenes images and code scripts Refine your rigging skills with tutorials and project files available on the companion website
Visa hela texten

Eyal Assaf is a Technical Artist currently living and working in Toronto, Canada. A graduate from the Ontario College of Art and Design, Eyal has been involved in the animation, gaming and broadcast industries since the mid-90's when digital dinosaurs began to roam the big screens. His wide range of experience led him to positions such as Visual Effects Supervisor on an award winning animated 3D television show, as well as other lead positions in a variety of commercials, broadcast, film and game projects. He is also an internationally published illustrator in various trade publications and teaches 3D and Design at a college level.