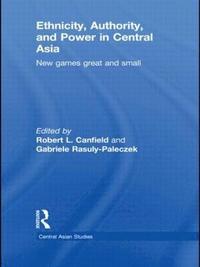 av Robert L Canfield, Gabriele Rasuly-Paleczek
Inbunden Engelska, 2010-09-08
2009
Köp
Spara som favorit
Finns även som
Visa alla 4 format & utgåvor
The peoples of Greater Central Asia - not only Inner Asian states of Soviet Union but also those who share similar heritages in adjacent countries like Afghanistan and Pakistan, Iran, and the Chinese province of Xinjiang - have been drawn into more direct and immediate contact since the Soviet collapse. Infrastructural improvements, and the race by the great powers for access to the region's vital natural resources, have allowed these peoples to develop closer ties with each other and the wider world, creating new interdependencies, and fresh opportunities for interaction and the exercise of influence. They are being integrated into a new, wider economic and political region which is increasingly significant in world affairs, owing to its strategically central location, and its complex and uncertain politics. However, most of its inhabitants are pre-eminently concerned with familial and local affairs. This work examines the viewpoints and concerns of a selection of groups in terms of four issues: government repression, ethnic group perspectives, devices of mutual support, and informal grounds of authority and influence. Responding to a need for in-depth studies concerning the social structures and practices in the region, the book examines trends and issues from the point of view of scholars who have lived and worked "on the ground" and have sought to understand the conditions and concerns of people in rural as well as urban settings. It provides a distinctive and timely perspective on this vital part of the world.
Visa hela texten

Robert L. Canfield is Professor of Anthropology at Washington University, St. Louis, USA. His many publications include (as co-editor) Revolutions and Rebellions in Afganistan, and (as editor) Turko-Persia in Historical Perspective. Gabriele Rasuly-Paleczek is Associate Professor in the Department for Social and Cultural Anthropology, University of Vienna, Austria.

Part I, Repressions and their Consequences 1. Authoritarianism and Its Consequences in ex-Soviet Central Asia 2. Localism and Identity among the Uyghur of Xinjiang Part II, Ethnic Perceptions and Reactions 3. Central Asian Attitudes towards Afghanistan; Perceptions of the Afghan War in Uzbekistan 4. Alignment Politics and Factionalism among the Uzbeks of North-Eastern Afghanistan 5. Rebuilding Afghanistan 6. Pukhtun Identity in Swat, Northern Pakistan Part III, Devices of Mutual Support 7. Towards a Transnational Community: Migration and Remittances among the Hazaras 8. An Interregional History of Pashtun Migration, c. 1775-2000 Part IV, Mechanisms of Authority and Influence 9. Political Games in Post-Soviet Uzbekistan: Factions, Protection and New Resistances 10. Female Mullahs, Healers and Leaders of Central Asian Islam: Gendering the Old and New Religious Roles in Post-Communist Societies 11. Efficacy and Hierarchy: Practices in Afghanistan as an Example